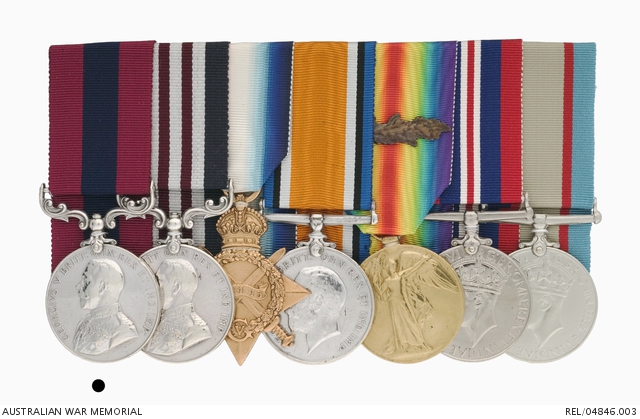 Charles Alfred Birtles was born at Beechworth, Victoria, in June 1889, and was working as a labourer before he enlisted in the AIF on 9 July 1915. With the service number 2117, he sailed from Sydney in September of the same year with the 4th Reinforcements to 19 Battalion. Serving as a Lewis gunner on the Western Front, he was Mentioned in Despatches for bravery in the attack on Flers in November 1916. The following year, he was awarded the Distinguished Conduct Medal for gallantry during the advance to the Hindenburg Line, and the Miltary Medal for his courage and initiative at Zonnebeke, near Ypres. He was also promoted to sergeant. Commissioned in 1918, Birtles transferred to the Australian Flying Corps, and trained as a pilot on Sopwith Snipes, but the war ended before he could receive an operational posting, and he returned to Australia in May 1919. He enlisted again during the Second World War, serving as Lieutenant N75439 with 1 Pioneer Training Battalion at Wallgrove NSW, and later settling in Canberra. The citation for the DCM reads as follows: 'For conspicuous gallantry during an enemy attack on 15th. April against NOREUIL. He was No. 1 of a Lewis Gun Team which caused very heavy enemy casualties throughout the attack. At one stage, in order to secure an enfilading position for his gun, L/Cpl BIRTLES moved same round to a position on our flank under very heavy enemy M.G. fire and sniping. It was from this position that this gun helped considerably and was to a large extent responsible for breaking up enemy attack. This N.C.O. had been already recommended for conspicuous gallantry in the attack carried out by this battalion on 14th. November 1916'.