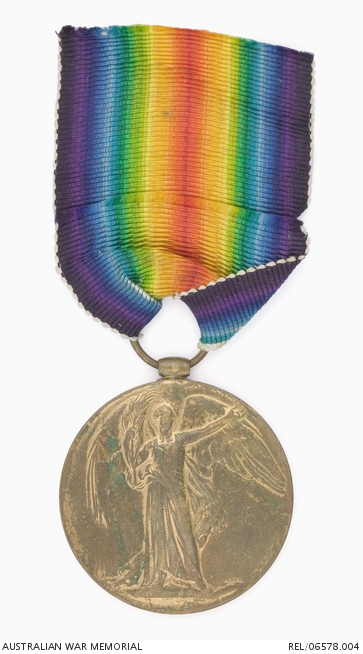 Victory Medal. Impressed around the edge with recipient's details.

Julian North, born Bunbury, Western Australia, was 24 years 6 months and working as a painter when he enlisted in the AIF on 7 September 1914. Assigned to D Company, 11th Battalion under service number 931, he served on Gallipoli, where he was wounded on 11 July 1915, receiving a ‘severe’ gunshot wound to his left hand. He returned to his unit on 26 October; after the evacuation, in Egypt in January 1916, he was appointed Lance Corporal.

North was again wounded, this time in his thigh, in France on 3 July 1916, but was able to return to duty three days later. It is likely this injury was sustained in 11 Battalion’s trench raid on German positions at "The Tadpole" (near Cordonnerie, between Fleurbaix and Aubers) on the night of 2/3 July, in the lead up to the Battle of Fomelles. His service record indicates he reverted to the rank of private “at his own request” - two weeks later, on 19 July, he was attached to the newly-formed 3rd Australian Light Trench Mortar Battery where he was placed in charge of a Stokes Mortar unit, just prior to their involvement in the Pozieres battle, where they closely followed the advance of the infantry.

In January 1917, when the battery were at Dernancourt he was promoted to corporal. At Bullecourt in May 1917, was awarded the Distinguished Conduct Medal for his actions during a German counter-attack. Between March and April 1918 Corporal North was detached for duty at the 3rd Australian Infantry Brigade School in France as an instructor. He rejoined his mortar unit in early April and was wounded for the third time on 3 July at Strazeele, suffering a mild gunshot wound to his hip, but was back in action on the same day. After being promoted to temporary sergeant on 20 September, Julian North was returned to Australia in October 1918 as part of the Anzac Draft 1914 scheme. He was discharged from the AIF on 17 February 1919.