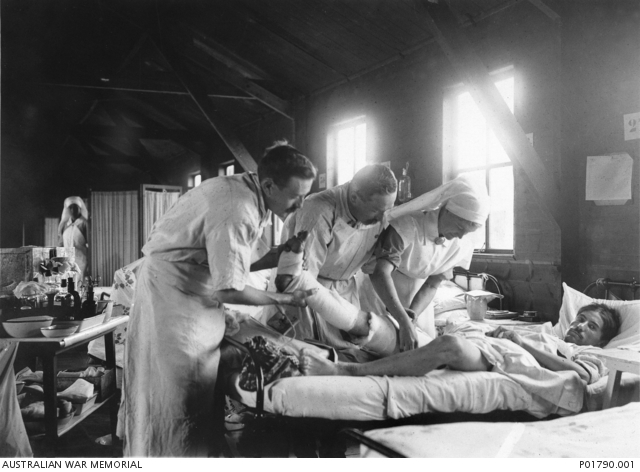 Forges-les-Eaux, France. A medical orderly, Major Davidson and Sister Lynette Crozier, a Bluebird, applying a dressing to the leg of a wounded French soldier, at a mobile hospital south-west of Amiens. The hospital was established by Mrs Borden Turner, a rich American woman, to operate behind the lines on the Western Front. In 1917-18 she employed, through the Australian Red Cross, four Australians to nurse wounded French soldiers. These were Sisters Crozier, Minnie Hough, Hilda Loxton and Wallace. They were among twenty trained civilian nurses who volunteered in Australia in 1916 for service in French hospitals. They were called the Bluebirds because of their blue veil and were sent to the Western Front by the NSW Branch of the Australian Red Cross and were sponsored by the NSW Jockey Club. (Original album print held in the AWM archive store) (Donor H. Loxton)