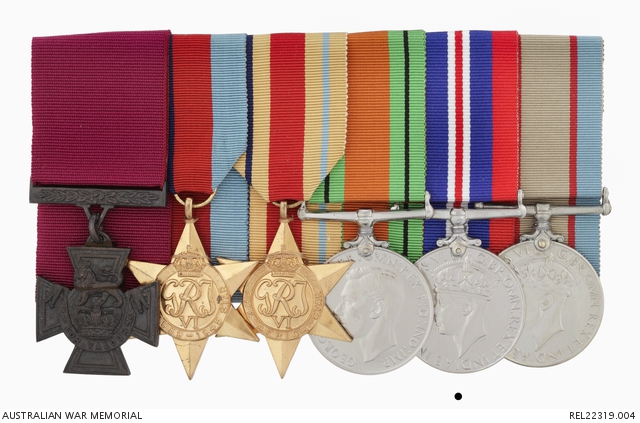 Awarded posthumously to WX9858 Private Arthur Stanley Gurney who was born at Day Dawn on the Murchison goldfields, near Cue, Western Australia on 15 December 1908. One of five children to George and Jane (nee Roberts) Gurney, Arthur was schooled at Day Dawn State School before entering Stott's Business College in Perth. After leaving school he worked briefly for a land agent before gaining a position with the City of Perth Electricity and Gas Department.

Gurney enlisted in the Second AIF at Claremont on 6 December 1940. He embarked at Fremantle for the Middle East 5 July 1941, joining D Company, 2/48 Battalion (2/48Bn) at Tobruk, Libya on 12 September. In October, the battalion moved to Palestine and in early 1942 to Syria. In June, as part of 9 Division, the battalion was rushed up to Egypt to meet Field Marshal Erwin Rommel's advance across Egypt. On 29 June, following a series of losses, the allied Eighth Army, of which 9 Division was a part, fell back to the Alamein Line, barely 100 kilometres from the British Naval Base at Alexandria.

On 9 July, 2/48Bn was moved forward to the Alamein Line. With 9 Division, the battalion was to counter-attack the northern flank of Rommel's forces. 2/48Bn's objectives were the Hill of Jesus and Tel el Eisa Railway Station. Shortly before the action Gurney wrote home saying: 'I regret that up to date I have not had a chance of locking horns with [the enemy], but I hope we shan't be long now.' At about 3.40 am on 10 July the attack began. D and A Companies' objective of Point 23, north east of Tel El Eisa Station was taken soon after dawn. D and C Companies then swung down and took the station itself. Counter attacks soon followed and fierce fighting continued for the next two weeks.

At dawn on 22 July, B and D Companies were deployed to take West Point 24, an enemy position south west of the railway cutting. The action had not long commenced when the companies came under concentrated fire and were halted less than 200 metres from the enemy strong posts. Any attempt by the Australians to move forward was met with withering machine gun fire. Casualties quickly mounted to the point that D Company had lost all its officers. 17 Platoon, including Gurney, was now commanded by Private Herb Ashby.

At this point Gurney, closely followed by Private Ivan Hanel, rushed the nearest enemy machine gun post, somehow evading the heavy fire. Nearing the post Gurney threw a grenade and bayoneted a German before both men jumped into the trench, taking the post. Gurney then turned his attention to the next post but Hanel was killed before he could follow. Gurney continued on alone to take the next machine gun pit, accounting for a further three enemy soldiers in the process. Without slacking he moved toward a third before he was momentarily stunned when a grenade knocked him to the ground. Recovering his senses, he launched forward and disappeared into the enemy trench. He was using his bayonet to effect when he was killed by enemy machine gun fire. His body was later recovered from the enemy trench. For his actions Gurney was posthumously awarded the Victoria Cross.

Gurney is buried in plot XVI. H. 21. of El Alamein War Cemetery. His medal group came into the National Collection in 1994.