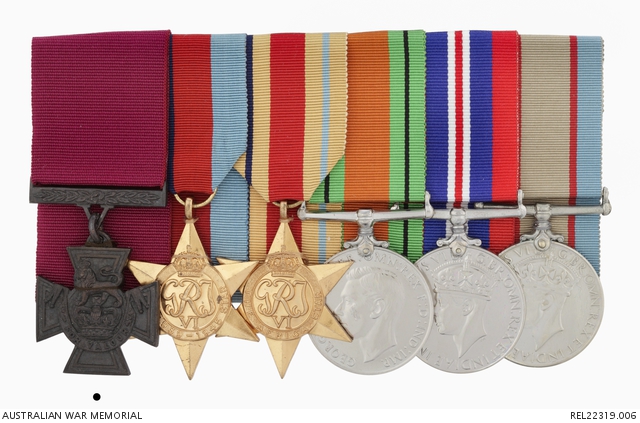 WX9858 Private Arthur Stanley Gurney was born at Day Dawn on the Murchison goldfields, near Cue, Western Australia on 15 December 1908. One of five children to George and Jane (nee Roberts) Gurney, Arthur was schooled at Day Dawn State School before entering Stott’s Business College in Perth. A keen cyclist, he was heavily involved in competition cycling in Western Australia. In 1929 he won the C R Wilson Shield, a 50 mile open cycling race with prize money of 14 pounds. After leaving school he worked briefly for a land agent before gaining a position with the City of Perth Electricity and Gas Department.

Gurney enlisted in the Second AIF at Claremont on 6 December 1940. He embarked at Fremantle for the Middle East on 5 July 1941, joining D Company, 2/48 Battalion (2/48Bn) at Tobruk, Libya on 12 September. In October, the battalion moved to Palestine and in early 1942 to Syria. In June, as part of 9 Division under Lieutenant General Leslie Morshead, 2/48Bn was rushed to Egypt to meet Field Marshal Erwin Rommel’s advance across Egypt. On 29 June, following a series of losses, the allied Eighth Army, of which 9 Division was a part, fell back to the Alamein Line, barely 100 kilometres from the British Naval Base at Alexandria.

On the morning of 6 July, 2/48Bn was moved forward to Shammama Halt, about 20 kilometres east of the small railway siding of El Alamein. Three days later the battalion formed up and moved to the Alamein Line. With 9 Division, the battalion was to counter-attack the northern flank of Rommel’s forces. 2/48Bn’s objectives were the Hill of Jesus and Tel el Eisa Railway Station. Shortly before the action Gurney wrote home saying: ‘I regret that up to date I have not had a chance of locking horns with [the enemy], but I hope we shan’t be long now.’ At about 3.40 am on 10 July the attack began. D and A Companies’ objective of Point 23, north east of Tel El Eisa Station was taken soon after dawn. D and C Companies then swung down and took the station itself. Counter attacks soon followed and fierce fighting continued for the next two weeks.

At dawn on 22 July, B and D Companies were deployed to take West Point 24, an enemy position south west of the railway cutting. The action had not long commenced when the companies came under concentrated fire and were halted less than 200 metres from the enemy strong posts. Any attempt by the Australians to move forward was met with withering machine gun fire. Casualties quickly mounted to the point that D Company had lost all its officers. 17 Platoon, including Gurney, was now commanded by Private Herb Ashby.

At this point Gurney, closely followed by Private Ivan Hanel, rushed the nearest enemy machine gun post, somehow evading the heavy fire. Nearing the post Gurney threw a grenade and bayoneted a German before both men jumped into the trench, taking the post. Gurney then turned his attention to the next post but Hanel was killed before he could follow. Gurney continued on alone to take the next machine gun pit, accounting for a further three enemy soldiers in the process. Without slacking he moved toward a third before he was momentarily stunned when a grenade knocked him to the ground. Recovering his senses, he launched forward and disappeared into the enemy trench. He was using his bayonet to effect ‘when the inevitable end to such a magnificent display of single handed courage came. A burst from another machine gun killed him.’ His body was later recovered from the enemy trench. For his actions Gurney was posthumously awarded the Victoria Cross. The recommendation for the award was, unusually, initiated by Ashby, a private. The citation reads:

For gallantry and unselfish bravery in silencing enemy machine-gun posts by bayonet assault at Tel el Eisa on 22nd July, 1942, thus allowing his Company to continue the advance. During an attack on a strong German position in the early morning of 22nd July, 1942, the Company to which Private Gurney belonged, was held up by intense machine-gun fire from posts less than 100 yards ahead, heavy casualties being inflicted on our troops, all the officers being killed or wounded. Grasping the seriousness of the situation and without hesitation, Private Gurney charged the nearest enemy machine-gun post, bayoneted three men and silenced the post. He then continued on to a second post, bayoneted two men and sent out a third as a prisoner. At this stage a stick of grenades was thrown at Private Gurney which knocked him to the ground. He rose again, picked up his rifle and charged the third post using the bayonet with great vigour. He then disappeared from view and later his body was found in an enemy post. By this single-handed act of gallantry in the face of a determined enemy, Private Gurney enabled his Company to press forward to its objective, inflicting heavy losses upon the enemy. The successful outcome of this engagement was almost entirely due to Private Gurney’s heroism at the moment when it was needed.

The loss of Gurney was felt keenly throughout the battalion. In a letter to Gurney’s sister, the battalion commander Lieutenant Colonel H H Hammer wrote that ‘every man of the 48th Bn shares with you your sorrow in the loss you have suffered.’ The 11 September 1942 edition of the battalion’s newsletter, ‘Khamseen Kronicle’, was dedicated to ‘one whose courage on the field of battle wreaths his death in glory and begets honour to his comrades and country.’ Gurney is buried in plot XVI. H. 21. of the El Alamein War Cemetery. His VC and campaign medals came into the National Collection in 1993.