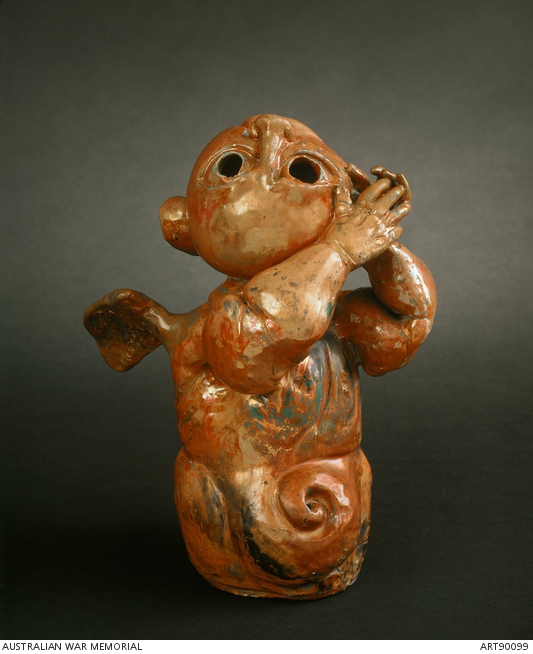 'Listening angel' reflects on 'the Korean war and the post-atomic age' and was created in response to that conflict. It is part of a group of ceramic sculptures begun in 1957. Informed in part by an awareness of the Korean War and by fears of an impending atomic war, these 'angels' are concerned with good and evil, and hope for a better future. They were not about 'flying spiritual objects because they represent humanity as a whole'. Perceval was deeply affected by the implications of war, and transmuted his feelings in personal ways in his paintings and later in his sculptural angels. The angels encompass a range of emotions and expressive gestures. A couple are shown fighting, while others appear thoughtful, arduous, vulnerable and attentive. All have the facial features and small chubby hands of children. When he first started to make his angels, they were mostly 'young babies with wrinkled toes and hands'. Although he later dealt with more 'sophisticated subjects, such as lovers and grown up people', they all retained the same qualities as those dealing with small children. Compared with the underlying despair of some of Perceval's paintings of children in the 1940s, there is a greater tenderness in the later angels. In the precise, attentive gesture of the cupped hands in 'Listening angel', Perceval seems to suggest that active listening may alleviate the anxieties of mind and spirit in the here and now. As the artist said in a 1962 interview: 'An atomic war seemed to be coming at that time and many artists of quality were expressing the idea in their work that destruction and devastation were inevitable. I felt I should go the other way ... It's either optimism or resign yourself to going under'. In 'Listening angels' this optimism is not careless or hurried. The work conveys the need to take the time to stop and listen, to develop a heightened awareness of our capacity to transform suffering and in the process to recognise our common humanity.