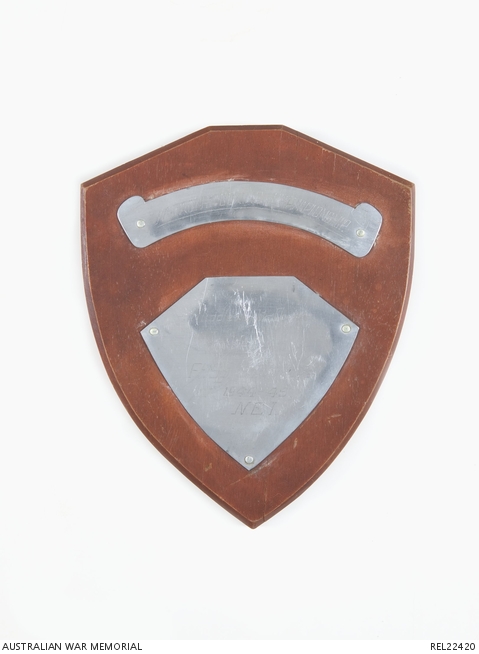 Wooden shield shaped boxing trophy which has two aluminium pieces attached to it with aircraft rivets. The top piece, in the shape of a scroll is engraved with the words 'MOROTAI. BOXING. CHAMPIONSHIP' and the lower shield shaped piece is engraved 'Middleweight Division Won by FLT/SGT "Len" Waters. 1944-45 N.E.I.'

This boxing trophy was won by, and presented to, 78144 Flight Sergeant Leonard Victor 'Len' Waters during his service with 78 Squadron, Royal Australian Air Force. Descended from the proud Gamilaraay (Kamilaroi) people of North Western NSW/South West Queensland Waters was born on the Euraba Mission, near Boomi in New South Wales, on 20 June 1924, and worked as a shearer after leaving school before his fourteenth birthday. He joined the RAAF on 24 August 1942 and graduated from the Flight Mechanics Course in January 1943. He was later selected for aircrew training and graduated as Sergeant pilot. Posted to No.78 Squadron on 14 November 1944, he flew a total of 95 operational sorties over New Guinea and the Dutch East Indies (now Indonesia) in 1944 and 1945 from bases on Noemfoor, Morotai and Tarakan. Len has the distinction of being the only known Australian Aboriginal fighter pilot in the RAAF during the Second World War (there are another two known Australian Aboriginal bomber pilots, Squadron Leader D V Paul DFC and Flying Officer R Hill). His regular aircraft whilst flying with No.78 Squadron was a P-40N Kittyhawk fighter-bomber named 'Black Magic' (A29-575), with the Squadron code and individual identifying markings being 'HU - E'. This aircraft had been named by a previous pilot in the unit who had transferred out of 78 Squadron. On 1 January 1946, Waters was promoted to Warrant Officer and seventeen days later on 18 January 1946 he discharged from the RAAF. He never returned to flying aircraft after the war and died on 24 August 1993 (51 years to the day of his joining the RAAF) in Cunnamulla, Queensland. To forever commemorate Uncle Len's life and highly significant career in the Australian Defence Force several streets and parks have been named in his honour, including in the Federal Capital of Canberra and in St George, Queensland.