NT. 1942-08. The first Ghan, the train that ran on the original railway line between Adelaide and ... 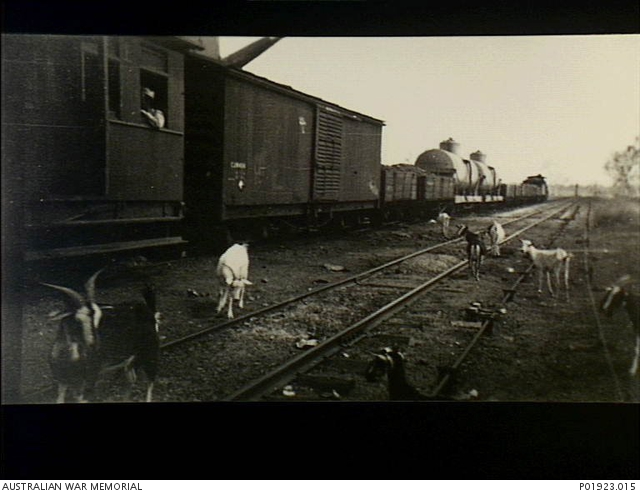 NT. 1942-08. The first Ghan, the train that ran on the original railway line between Adelaide and Alice Springs, during a halt in its journey carrying the Regimental Band, 135th Medical Regiment, U.S. Army. Note the goats in the foreground. In 1942-05 the Regimental Band was posted to General Headquarters in Melbourne as General Douglas MacArthur's Bodyguard. While in Melbourne the band provided music for civilian and military functions and gave regular concerts at the U.S. 4th General Hospital. In mid 1942-08 it staged in Adelaide on its way to rejoin Regimental Headquarters in Birdum NT, where the 135th had built an Evacuation Hospital . This hospital provided surgical and pathological services for the nearby No. 45 Australian Camp Hospital. The band played at U.S. and Australian hospitals along the highway from Birdum to Darwin and later at Brisbane, Port Moresby, Milne Bay and Finschhafen.