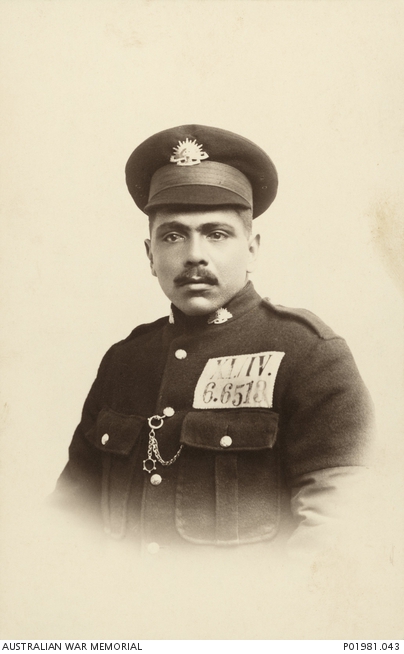 Studio portrait of Australian Aboriginal Prisoner of War (POW) 360 Private (Pte) Reginald Francis Hawkins, 42nd Battalion, from Jericho, Queensland who enlisted at the age of 23 on 29 October 1915 and embarked for overseas on 5 June 1916 aboard HMAT Borda. He was hit by a shell in the left leg and right side of the head and captured at Armentieres, France, on 14 February 1917. A report from a fellow soldier stated; "I knew Hawkins who had been a buck jumper rider, and had travelled with a show. About the 14th February we were near Armentieres and the Germans made a night raid. They got into our trench but were quickly ejected. After the raid Hawkins and I believe another man were missing. No trace of Hawkins could be found, and it was believed that he had been taken prisoner". After he was taken prisoner, Pte Hawkins was assigned the POW identity number 6.6518, the first 6 referring to his Prisoner group in the camp. He can be seen wearing this number on his prisoner uniform. Private Hawkins was held as a POW in various camps in Germany until he was repatriated to England on 10 January 1919 and arrived back in Australia on 12 May 1919. Private Hawkins is the brother of the Roughrider (horsebreaker) Harry Hawkins of the 2nd Remount Unit. One of a series of over 400 photographs sent by Australian POWs in German camps to Miss M. E. Chomley, Secretary, Prisoners Department, Australian-British Red Cross Society, London. Original album housed in AWM Research Centre at RC00864, Album image number 293.