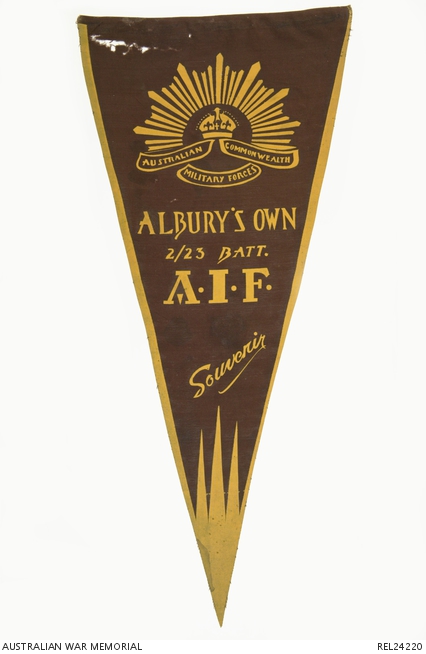 Brown triangular pennant screen printed in yellow with a Rising Sun emblem and the words 'ALBURY'S OWN 2/23 BATT. A.I.F. Souvenir'.

This pennant was given to the mother of VX42266 Acting Corporal John Leslie Johnson of 2/23 Battalion. It was a souvenir from a parade held on the Albury sports ground on Sunday 3 November 1940. On this occasion the battalion was presented with a regimental colour and a set of drums by the citizens of Albury. 'Jack' Johnson was born at 'Rock View' near Walwa in the Upper Murray region of Victoria on 22 July 1902. On 18 June 1940 he volunteered for service with the AIF in Albury. Married to Josephine and father to seven children, Johnson was nearing the age of 38. On the 27 July he formally enlisted in Caulfield, Melbourne and by 1 July was back in Albury training with B Company, 4 Infantry Training Battalion. On 20 August, 2/23 Battalion, known as 'Albury's Own', was raised and Johnson became an original member. He continued training with the battalion and was promoted acting corporal in October. On 16 November the battalion embarked for the Middle East aboard HMT Strathmore. By this time Johnson had learnt he was to be a father for the eighth time. He served in North Africa, sending letters home from Dimra in Palestine, Mersa Matruh, Fort Capuzzo and Tobruk. In May 1941 the Afrika Corps captured posts in the area of Post S9 around Tobruk. 2/23 Bn counter-attacked and on 17 May, Johnson was wounded in action. He later died of his wounds and is buried in the Tobruk War Cemetery. In 2003 Johnson's life in the army, as revealed by his letters home to his family, was the subject of an ABC television documentary and book.