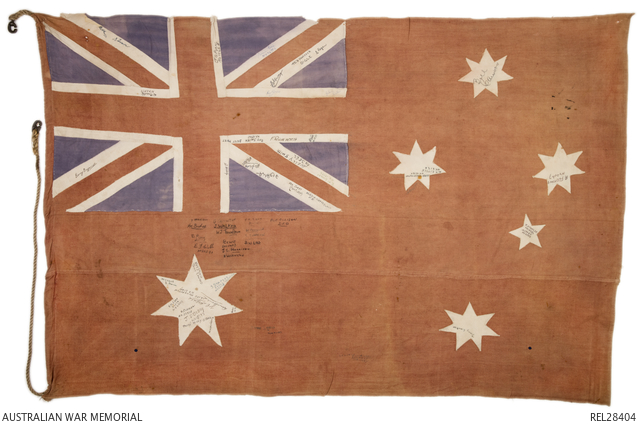 Improvised Australian red ensign with a genuine piece of hemp flag halyard with metal fittings inserted into the hoist end. The main body of the flag is constructed out of one large and one small panel machine stitched together with a French seam. The pocket to take the halyard on the hoist end is also machine stitched. The brick red body of the flag has been cut to allow the Union Jack and stars of the Australian flag to be inserted into the flag using fine overcast hand stitching. The white portions of the flag are in coarse white cotton. The blue sections of the Union Jack are in the same fabric as the red ground but have been dyed blue. Both the red and blue fabric has been unevenly hand dyed, possibly with iodine for the red, and ink for the blue. The stars, white sections of the Union Jack and the red section between the Union Jack and the Federation Star bear approximately 55 signatures of Australians who were captured by the Germans during the Greece/Crete campaign in 1941. The overstitching on some of the sections of the Union flag has not been completed and they are held in place by a long running stitch.

The exact history of this flag is unknown. Most of the signatures on it are those of Australian prisoners of war (POW) of the Germans who were captured in Greece in 1941. The majority can be identified as members of 2/5 Australian General Hospital (2/5 AGH), who were taken prisoner by the Germans in Athens. About half of 2/5 AGH's staff were evacuated from Greece before it fell to the Germans but the remainder were captured on 27 April 1941. The hospital was allowed to continue to operate from various locations in Athens until December 1941 when its staff and patients were dispersed to various POW camps, mostly to Stalag XXA at Thorn in Poland. It was here that a number of the men, including Sergeant Fred Butterfield, proposed making an Australian flag to boost morale.
The man thought to be responsible for the actual making of the flag, NX21186 Private Jim Kettle, who died in 1946, did not sign the flag. All except six of the 2/5 AGH POWs were repatriated to Australia in October 1943, because they had been non-combatants, and most returned to service in their re-formed hospital or to other medical units. It is not known who brought the flag back to Australia.