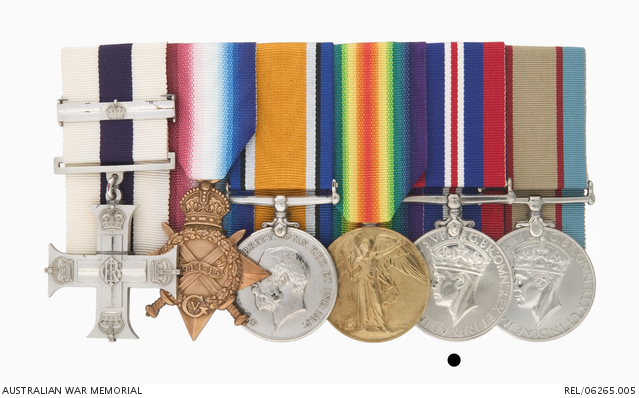 Albert Harold Hill was a shearer from the Barcaldine district of Queensland when he enlisted in June 1915. Originally posted as private 1428, a reinforcement to 2nd Light Horse Regiment, he transferred as a gunner to the 5th Divisional Ammunition Column in Egypt in April 1916 and shortly after was promoted to sergeant before moving to France a few weeks later.

Hill was sent to officer’s school in May 1917, commissioned second lieutenant in September and taken on strength to 31st Battalion the following month. On 1 December he was promoted to lieutenant.

Early in March 1918, Hill was posted to 5th Australian Division Headquarters to take part in a Corps boxing tournament before attending a scouting and patrolling school. On 21 March after returning to his unit, Hill, along with Lieutenant George William Jennings and Lance Corporal Augustus Ferdinand Chapman, were attempting to observe the enemy trenches through a heavy mist when the enemy “put down a lighting barrage with artillery and minenwerfer”. Presently a party of approximately 60 Germans appeared almost on their position, armed with rifles with fixed bayonets and stick bombs.

Hill wounded the leading man in the shoulder, while the three emptied their revolvers and threw grenades into the party, forcing them to momentarily withdraw. Before the Australians could retire, the Germans attacked with stick bombs, wounding all three but they managed to return to their lines. Rifle and Lewis Gun fire was brought to bear on the possible location of the German’s however the lack of visibility hampered any effective fire. Hill and Jennings, only slightly wounded, remained on duty while Chapman was evacuated. Soon after Hill returned to the position where the fighting took place to gather intelligence but the Germans had retired leaving behind a large number of stick bombs.

For their actions Hill and Jennings were awarded the Military Cross, and Chapman was awarded a bar to his Military Medal received for his actions at Polygon Wood in September 1917.

On 10 May, Hill observed a British plane brought down close to the German lines and called for a volunteer to help carry a stretcher to retrieve the pilot. Hill and Private Harry Boughton then walked 500 metres across open ground under fire in broad daylight and succeeded in rescuing the pilot and bringing him back to safety. For their actions, Hill received a bar to his Military Cross and Boughton was awarded the Military Medal.

Hill’s active service ended when he suffered a severe chest wound in fighting near Villers Carbonell on 29 August and he returned to Australia on 15 May 1919. He served again during the Second World War with 8 Garrison Battalion and died on 28 December 1974, aged 86.