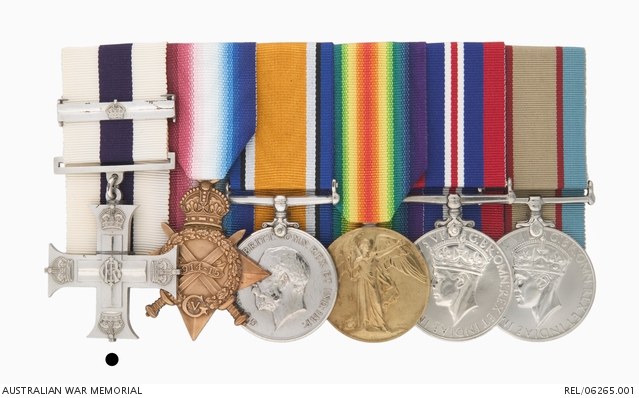 Albert Harold Hill was a shearer from the Barcaldine district of Queensland when he enlisted in June 1915. Originally posted as private 1428, a reinforcement to 2nd Light Horse Regiment, he transferred as a gunner to the 5th Divisional Ammunition Column in Egypt in April 1916 and shortly after was promoted to sergeant before moving to France a few weeks later.

Hill was sent to officer’s school in May 1917, commissioned second lieutenant in September and taken on strength to 31st Battalion the following month. On 1 December he was promoted to lieutenant.

Early in March 1918, Hill was transferred to 5th Australian Division Headquarters to take part in a Corps boxing tournament before attending a scouting and patrolling school. On 21 March, after returning to his unit Hill, along with Lieutenant George William Jennings and Lance Corporal Augustus Ferdinand Chapman, were attempting to observe the enemy trenches through a heavy mist when the enemy “put down a lighting barrage with artillery and minenwerfer”. Presently a party of approximately 60 Germans appeared almost on their position, armed with rifles with fixed bayonets and stick bombs.

Hill wounded the leading man in the shoulder, while the three emptied their revolvers and threw grenades into the party, forcing them to momentarily withdraw. Before the Australians could retire, the Germans attacked with stick bombs, wounding all three but they managed to return to their lines. Rifle and Lewis Gun fire was brought to bear on the possible location of the German’s however the lack of visibility hampered any effective fire. Hill and Jennings, only slightly wounded, remained on duty while Chapman was evacuated. Soon after, Hill returned to the position where the fighting took place to gather intelligence but the Germans had retired leaving behind a large number of stick bombs.

For their actions Hill and Jennings were awarded the Military Cross, and Chapman was awarded a bar to his Military Medal received for his actions at Polygon Wood in September 1917.

The recommendation for Hill’s award reads:

‘East of WYTSCHAETE on 21st March 1918 Lieut. HILL displayed conspicuous gallantry and initiative. After patrolling No Man’s Land during the previous night, this officer with two comrades took up a position at 5.10 a.m. near the enemy’s wire, intending to remain there during the day to observe.

At 6.40 a.m. about 60 enemy were seen advancing in two parties towards our line, armed with rifles – bayonets fixed – and stick bombs. Realising that an attack was intended on our picquet line Lieut. HILL and his companions gallantly decided to resist the attack. Lieut. HILL opened fire on the leading man of the enemy with his revolver from a distance of five yards hitting him in the shoulder: his companions followed suit with the result that the enemy were thrown into confusion. The enemy hurled a shower of stick bombs at our party, wounding all three of them. Notwithstanding this they continued to fight until their revolvers were empty and their supply of bombs were finished, and succeeded routing the enemy and inflicting casualties. Lieut. HILL then decided to withdraw. During the homeward journey he, at great personal risk, helped to extricate Lieut. JENNINGS from the barbed wire, and on reaching our trench finding that the remaining member of the party had not arrived he returned and accompanied his comrade back.
Wishing to obtain identification, Lieut. HILL with a Corporal from the nearest post, returned to the scene of the fight. None of the enemy were found, but the ground was covered in stick bombs and blood.
The courage and determination of this Officer undoubtedly broke up the enemy’s attack, and averted many casualties.

His gallantry is deserving of special recognition.’

On 10 May, Hill observed a British plane brought down close to the German lines and called for a volunteer to help carry a stretcher to retrieve the pilot. Hill and Private Harry Boughton then walked 500 metres across open ground under fire in broad daylight and succeeded in rescuing the pilot and bringing him back to safety. For their actions, Hill received a bar to his Military Cross and Boughton was awarded the Military Medal. The recommendation for Hill’s award reads:

‘For conspicuous gallantry and bravery in the field.

Near BOUZENCOURT on the 10th May 1918, a single seater aeroplane (British) crashed out of control at about 7.10 p.m. in full daylight inside the German night outpost line. Believing the pilot might still be alive, though wounded and although the Germans were heavily machine-gunning the plane and out trenches at the time, he called for a volunteer to assist him to carry a stretcher; selecting one of the volunteers, he left our trenches and with the greatest coolness walked across the 600 yards of “No Man’s Land” to the airplane, in the face of the enemy’s fire. Finding the pilot dazed, though unwounded, they assisted him from his plane, which had overturned, placed him on a stretcher and carried him back to our lines.

By his gallant disregard of his own life he saved the pilot from almost certain capture, and set a splendid example to his men.’

Hill’s active service ended when he suffered a severe chest wound in fighting near Villers Carbonell on 29 August and he returned to Australia on 15 May 1919. He served again during the Second World War with 8 Garrison Battalion and died on 28 December 1974, aged 86.