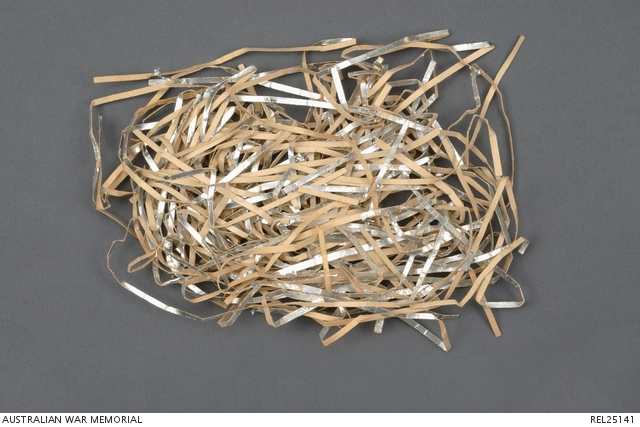 Approximately 50 strips of aluminium backed with paper, known as 'Window' or 'Chaff', of the type used to jam radar.

This is a remnant sample of 'Window' from 600 units dropped from Royal Australian air Force (RAAF) Catalina A24-97, 42 Squadron on operations around Manila on 14 December 1944. This aircraft was responsible for jamming Japanese radar while 19 other RAAF Catalinas mined the entrance to Manila Harbour in an attempt to confine a group of Japanese Navy vessels, including an aircraft carrier, four battleships, six cruisers and many destroyers. The Catalinas dropped six large and 11 small American mines. The operation achieved its objective but one aircraft was lost on the mission. 424171 Flight Sergeant (later warrant officer) Robert Noel Forbes, RAAF, was navigator of the 'jamming' aircraft. He claims that this was the first time 'window' was used in the Pacific theatre, by any nation. His aircraft was filled with strips of the 'window' for the operation, and navigation became very difficult. An American aircraft took over the jamming role from them an hour and a half after they began. Forbes completed two tours of duty serving with 71, 32 and 48 Squadrons, RAAF.