Exterior of the Anzac Buffet in the Domain, Hyde Park, which acted as a hospitality and reception ... 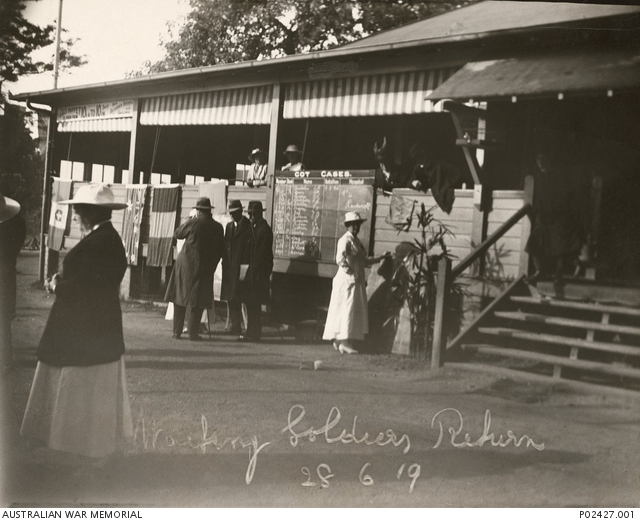 Exterior of the Anzac Buffet in the Domain, Hyde Park, which acted as a hospitality and reception centre for those waiting for returning troops. Note the sign advertising a buffet meal from 10am to 10pm. Civilians and Red Cross workers gather around the verandah of the building which as well as being draped with flags also carries a board headed `Cot Cases' and the names, numbers and ranks of soldiers and their destination of No. 4 Australian General Hospital (4AGH), Randwick. The original photograph is captioned `Waiting Soldiers Return. Minister James. Capt Nesigh (?Niesigh). Sydney Domain'. Minister James is possibly Augustus George Frederic James MLA who was Minister of Public Instruction and Minister of Labour and Industry at the time. Captain Niesigh was a Boer War veteran and a journalist in 1919. The Anzac Buffet was established by female volunteers in 1916. It was entirely volunteer run and operated on public donations. There were similar Anzac Buffets established by volunteers in Melbourne and London. From 1918 it became the main place where families and friends gathered to welcome home returning soldiers.