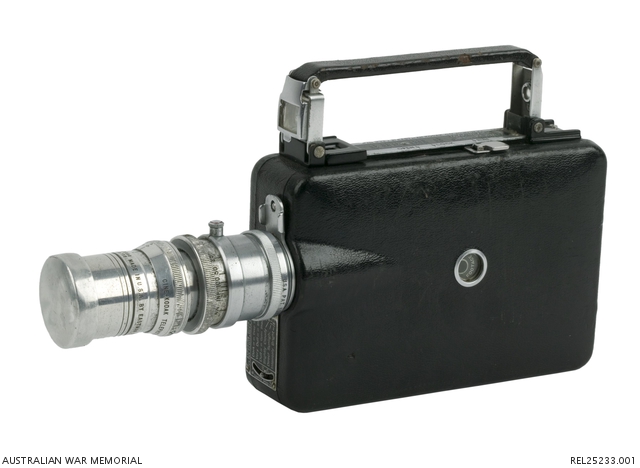 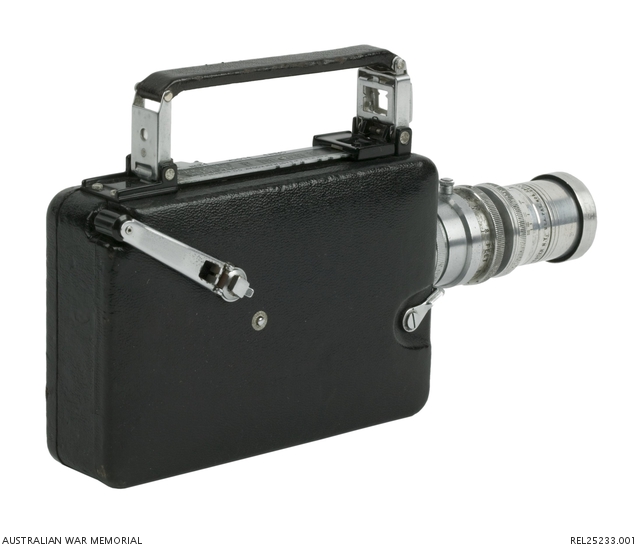 The right hand side features the shutter lever to the front and the integral spring motor winding mechanism to the rear - a notch at the upper rear of the camera houses the bakelite handle when not in use.

The left hand side of the camera bears a plastic window for showing how much film remains. This side also features the hinged door - opening it reveals the space for the film cartridge. This feature was introduced in the mid-1930s - previously one had to thread the film. The viewfinder is incorporated within the leather carrying handle at the top of the camera which also incorporates a sliding control with three stops - 'OPEN' (for the film loading), 'LOCK' (the camera doesn't run) and 'RUN'. The viewfinder can be slid along preset stops, running from 1 inch to 6 inches. but only operates when the camera control is set to 'RUN'.

The base of the camera incorporates a screwed tripod housing.

This camera was used by VX50279 Lieutenant Mick Sheehan to record his service in New Guinea, Bougainville and Balikpapan between 1942 and 1945. This film is part of the Australian War Memorial's collection (F03422). Michael Lawrence 'Mick' Sheehan was born on 1 February 1917 at Stawell, Victoria and enlisted in the AIF on 4 March 1941. Lieutenant Sheehan served in the 2/5th Independent Company (later the 2/5 Commando Squadron, part of 2/7 Cavalry Commando Regiment). Mick Sheehan died on 13 April 1997.