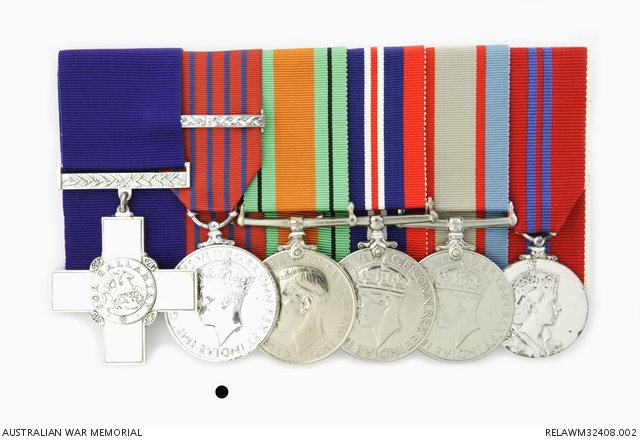 Medals of Lieutenant Hugh Randall Syme, Royal Australian Naval Volunteer Reserve (RANVR), born 28 February 1903 at Kew, Melbourne. Syme's father, John Herbert, was a journalist, and his son had settled in the family business (they published the 'Age' newspaper) as assistant manager when the Second World War broke out. A keen amateur sailor, Hugh Syme was accepted in RANVR as part of the Yachtsman Scheme (whereby the Australian Naval Board provided personnel to the Admiralty via the RANVR), passed a navigation test, and was appointed a probationary sub-lieutenant on 1 September 1940. Syme was soon mobilised to England, trained at HMS King Alfred and was among the first group of Australians to be chosen to serve in the Rendering Mines Safe section; he and others received specialist training and were posted to HMS Vernon where the section was based. Syme was promoted to Lieutenant in mid December 1940. German bombing and air raids ensured the team had plenty of practice disarming unexploded mines and bombs. Lieutenant Syme rapidly developed a reputation for bravery, especially in delousing previously unknown German mines. He was awarded the George Cross and George Medal and bar for a string of successful mine recoveries. He is only one of eight people who have won both the George Cross and George Medal gallantry awards. In January 1943 Lieutenant Syme returned to Australia following the death of both his father and uncle, and became temporary trustee of the family business. Despite his desire to return England, the RAN decided to keep him in Australia and utilise his expertise, setting him up in April 1943 at HMAS Cerberus as Commanding Officer of a bomb-disposal section. Little was asked of the section and Syme left the Navy in December 1944, returning to the family business; he was appointed general manager of the Age in 1946. His George Medal was awarded (see London Gazette 27 June 1941) for consistent courage and coolness in dealing with a series of ten unexploded enemy mines. One exploded while it was being turned to get at the fuse but Syme escaped uninjured. Another of the mines, hanging vertically by its parachute cords in a house at Manchester, also had to be turned. As Syme was unable to do this by hand, he attached a rope from the mine to his car, and used the power of the engine to turn it. Bar to George Medal awarded (London Gazette 19 June 1942) for dealing with a particularly dangerous parachute mine on 20 April 1941. The bomb had landed at Primrose Hill, London, near an anti-aircraft battery, and only 100 yards from a water reservoir. Syme dug down about 8 feet through heavy clay, came to the mine and exposed its clock. He then knew that the fuse was directly opposite and had to sap half way around the mine to reach it. Conditions in the trench were extremely bad and it had to be constantly bailed out. Having reached the fuse Syme then had to extract it by hand, an operation that was usually performed from a distance. This was the first time the technique had been performed on a mine, and it provided valuable information in performing other similar tasks.