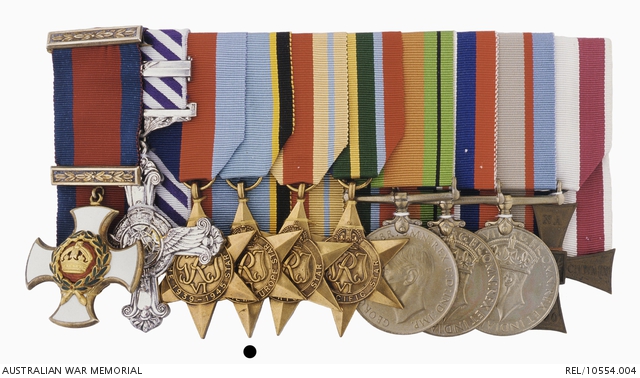 Clive Robertson Caldwell was born in Sydney, NSW, in 1910. Educated at Sydney Grammar, he developed an early enthusiasm for aircraft.When war was declared he determined to join the RAAF as aircrew. After modifying his birth certificate to indicate that he was 26 years old, (28 being the cut-off date for pilot training) Caldwell was accepted. He was one of the first Australians selected for the Empire Air Training Scheme. Graduating as a Pilot Officer in January 1941, he was posted to 250 Squadron, RAF, flying P-40 Tomahawk fighters in Syria, Palestine and North Africa. He recorded his first victory, (on 26 June) and Caldwell's score thereafter mounted rapidly. In January 1942 he was given command of 112 Squadron, RAF, whose P-40 Kittyhawks were already famous, and by May he had been awarded the Distinguished Flying Cross and Bar, as well as the Polish Cross of Valour in recognition of his work with that nation's forces.By the time he was posted away from the Middle East he had recorded 20.5 confirmed victories and earned the nickname 'Killer'. Returning to Australia in October 1942, Caldwell was given command of No 1 Fighter Wing, whose three squadrons of Spitfire Mk Vs were operating in defence of Darwin. He added eight Japanese aircraft to his tally before relinquishing command of the wing in August 1943 to become chief flying instructor at 2 OTU. In April 1944 he was given command of No 80 Fighter Wing, equipped with Mk VIII Spitfires. After operations from Darwin, the wing moved to Morotai in December where there was little productive work for it. A mounting sense of dissatisfaction amongst pilots with operations which were seen as pointless led to Caldwell's involvement in what became known as the 'Morotai Mutiny', in which eight senior airmen tendered their resignations. The subsequent disciplinary proceedings, left him embittered and he took his discharge in 1946. Australia's highest scoring ace of the Second World War, Caldwell died in Sydney in 1994.