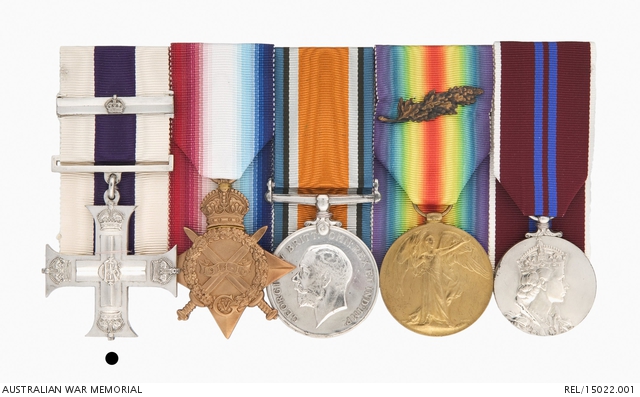 Roy Doutreband was born at Dubbo, NSW, in September 1894, son of Charles Francis Doutreband, a Belgian immigrant. He was educated at Sydney Grammar, and worked as an accountant before the war, as well as serving in the Militia with 21 Infantry Regiment. Enlisting in the AIF in January 1915, he received the service number 1937, and soon held the acting rank of sergeant, becoming part of the 5th Reinforcements to 5 Battalion.

He was taken on the strength of the unit at Gallipoli in July, and served through the remainder of the campaign, despite spending several weeks in hospital with illness. By the time of the evacuation, he had been confirmed in the rank of sergeant, and when the AIF was reorganised in Egypt in early 1916, he became part of the newly raised 57 Battalion, the ‘daughter’ unit of the 5th. Quickly promoted to Company Sergeant Major, (Warrant Officer Class II) Doutreband was commissioned following the heavy casualties suffered in the disastrous attack at Fromelles in July. He was promoted to lieutenant later in the same year, and in mid 1917 was appointed battalion intelligence officer.

Repeatedly recommended for awards in recognition of his gallantry and leadership, it was 1918 before he finally received the Military Cross for his distinguished service in the attack on Polygon Wood the previous September. Almost immediately, he was awarded a Bar to the MC for leadership and courage in the fighting around Villers Bretonneux in April. He was also Mentioned in Despatches before the war ended, and returned to Australia in March 1919.

After completing accountancy studies, Roy Doutreband obtained a position with the ‘Sydney Star’ (later the ‘Sun’) newspaper, and eventually rose to become its general manager. He died in Sydney in February 1959.

The recommendation for the MC reads as follows: ‘During the period 22nd September 1917 to 25th February 1918 this Officer’s services were of the highest order. At GLENCORSE WOOD, East of YPRES, on the night of 25th September 1917, when the Battalion was sent forward to link up with troops on our right who had been pushed back, he showed great gallantry in reconnoitring the scattered post on the ground under a very heavy artillery barrage and it was to a great extent due to his initiative that the gap was filled and the attack on the following morning carried out as ordered. During the heavy fighting in this vicinity on 26th, 27th and 28th September 1917, he continually distinguished himself by carrying out dangerous tasks under heavy shell fire. At BROODSEINDE RIDGE during the period 11th to 25th October 1917 he again distinguished himself and carried out many dangerous and important tasks. This officer’s work has always been of the highest order and he has always set an example of courage and initiative that has been a most valuable asset to his Battalion.’

The recommendation for the award of a Bar to the Military Cross reads as follows: ‘At VILLERS BRETONNEUX on the morning of the 24th April 1918 Lieut. DOUTREBAND, Battalion Intelligence Officer, showed great bravery and devotion to duty during an attack by the enemy on this village. Several times during the day whilst the battle was in progress Lieut. Doutreband went forward from our position in reserve, through a very heavy enemy barrage, and obtained and sent back information that was of the very greatest assistance to his Battalion Commander and to Brigade. After the successful counter-attack by the Brigade and recapture of the village in which he took part, Lieut. Doutreband, during the consolidation of the new line which was established, made a personal reconnaissance of the whole front line under very heavy shell and machine gun fire and was of great assistance in clearing up the situation. His conduct throughout was a fine example of bravery and devotion to duty. This officer has on many occasions shown the greatest devotion to duty and his coolness and bravery deserve special recognition. It may be mentioned that Lieut. Doutreband has been recommended for the Military Cross in the King’s Birthday Honours Gazette for similar action in a great number of previous engagements including POLYGON WOOD where the work was of extreme importance. Should that be granted – I would recommend a bar be added for the fine work he did on the present occasion.’