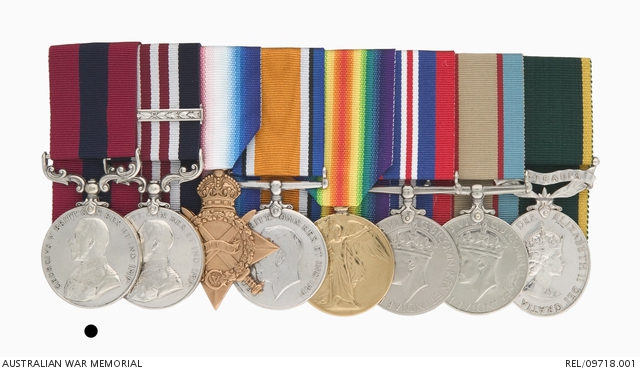 Charles James (Nobby) Clarke was born at Launceston, Tasmania, in October 1894. He moved to Victoria with his family as a young man, and was working as a shearer at Euroa before enlisting in the AIF in October 1914. He joined the 3rd Reinforcements to 14 Battalion, (originally with the service number 1512, later 1578) and sailed from Melbourne in February 1915.

Clarke served with his unit at Gallipoli until he was wounded at Durrant's Post in November, and did not rejoin the battalion in Egypt until after the evacuation. In early 1916, the battalion moved to the Western Front, and he was promoted to lance corporal. After the August fighting at Pozieres, Clarke was awarded the Military Medal (MM). Although records do not appear to have survived, it is known that the award was for gallantry in delivering messages under fire during this battle. Both the London Gazette and 4th Divisional Routine Orders confirm the award of the MM in November 1916.

The following year, Clarke was recommended for another award of the MM for his actions at Gueudecourt from late January to early February. However, this recommendation was not acted upon. Clarke also fought at Messines and Polygon Wood in 1917, and was promoted corporal in early 1918. He was recommended for a further award after an action at Villers Bretonneux in May, but again no action was taken.

In the great Allied attack of 8 August he distinguished himself by maintaining signal lines under heavy fire, and was awarded the Distinguished Conduct Medal. The recommendation reads: 'For conspicuous gallantry and devotion to duty near MORCOURT (E of CORBIE) on 8th August 1918. This N.C.O. rendered the most valuable services in maintaining communications throughout the operations. He personally ran lines and maintained several over bare ground swept by field guns over open sights and heavy machine gun fire. he worked tirelessly for 48 hours mending continual breaks and the successful maintenance of communication is largely due to his personal energy and work. When the unit was relieved he remained four hours maintaining lines for the incoming unit during which time the village was continuously shelled with all calibres. He set a fine example throughout.'

A similar exploit in September at Ascension Wood on the Hindenburg Outpost line, in one of the last Australian actions of the war, brought him a Bar to his Military Medal. Clarke returned to Australia with the acting rank of sergeant, and was discharged in 1920. He joined the Militia in 1928, as a lieutenant in 20 Light Horse Regiment, and was steadily promoted, holding the rank of major when the Second World War commenced. Although recalled to duty with the service number VX55289, he saw little service apart from a period with AIF Sea Transport, and retired in 1942. Nobby Clarke resumed farming at Nathalia in Victoria, and died there in November 1973.