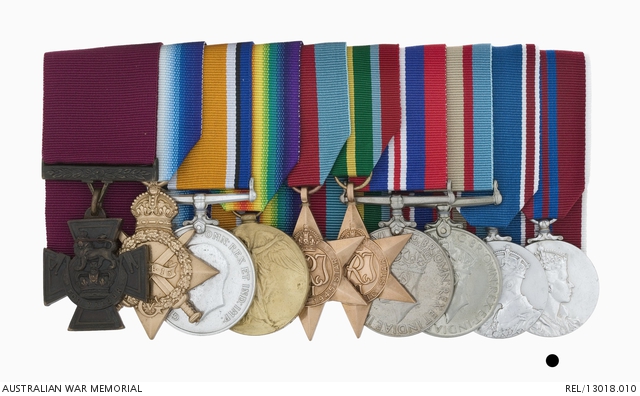 John 'Jack' Patrick Hamilton was born on 24 January 1896 to William and Catherine (nee Fox) Hamilton of Orange, New South Wales. He was schooled at Oakey Park, a small mining village near Lithgow where his father owned a butcher shop. Although he noted his trade as a butcher at the time of his enlistment, Hamilton was an active member of the Waterside Workers' Union, an affiliation that he maintained for the remainder of his life. On 15 September 1914, 18 year old Hamilton enlisted at Sydney and was posted as private 943 of 3 Battalion (3Bn) A.I.F, part of 1 Infantry Brigade (1Bde). On 19 October Hamilton embarked on HMAT Euripides, bound for Egypt, arriving in early December. Following training in Egypt, 1Bde sailed for Lemnos, arriving at 9.25am on 8 April 1915, as part of the Mediterranean Expeditionary Force. On the morning of 25 April, 1Bde moved ashore as part of the second and third wave at Ari Burnu, Gallipoli Peninsula. For his actions during the Battle of Lone Pine on 9 August 1915, Hamilton was awarded the Victoria Cross. He was evacuated to England on 21 October, suffering from dysentery, where he stayed until April 1916. While visiting England in March of 1916, Prime Minister William Morris Hughes expressed a desire to meet Hamilton as the Melbourne Argus reported from London: '[Hughes] was anxious to meet Private Hamilton, V.C., who is a fellow member of the Waterside Workers' Federation of which Mr Hughes is President.' Though not always a model soldier when off the line, he was promoted to corporal on 3 May 1916. After a period of illness, where he returned to England, Hamilton rejoined 3Bn in France on 4 December 1916. He was promoted to sergeant on 13 May 1917. Following a series of training courses through the latter half of 1917 and early 1918, Hamilton joined the No. 5 Officer Cadet Battalion in Cambridge. He graduated a second lieutenant on 2 January 1919, and posted to general infantry reinforcements. On 4 April he was promoted to lieutenant before being reunited with 3 Bn. Hamilton returned to Australia on 26 August and his service was terminated on 12 September. After the war, he resumed his affiliation with the waterfront, working as a labourer and, by the outbreak of the Second World War, a shipping clerk in Sydney. On 3 June 1940, Hamilton was seconded from the retired list to the second AIF as a lieutenant, service number NX150350. He was appointed to 16 Garrison Battalion situated at an internment camp outside of Hay, NSW. On 4 October 1942, Hamilton was transferred to the Australian Army Employment Service (redesignated later to Australian Works Companies) serving overseas in New Guinea and Bougainville. He was promoted to Captain on 21 October 1944. His service was terminated on 19 August 1946. John Patrick Hamilton, the last survivor of the seven Victoria Cross recipients from the Battle of Lone Pine, died on 27 February 1961. On 9 August 1985, the 70th anniversary of the Battle of Lone Pine, Hamilton's son, Alwyn, donated his father's medals to the Australian War Memorial.