Pozieres, France, 1917. The derelict hulk of a British tank on the Pozieres battlefield. This ... 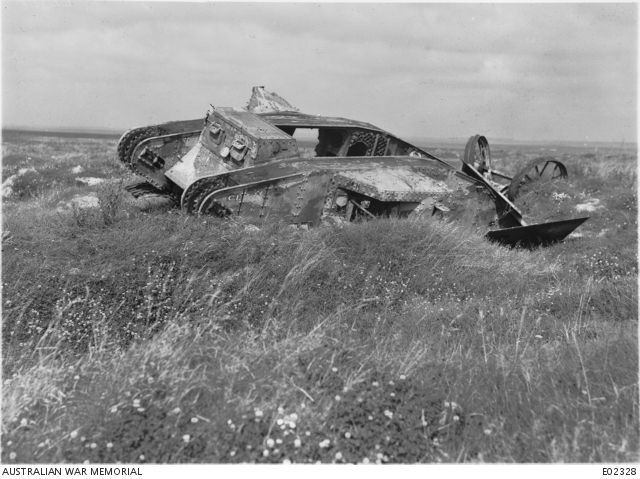 Pozieres, France, 1917. The derelict hulk of a British tank on the Pozieres battlefield. This Mark I Male tank, C1, (Champagne), belonged to C Company, Heavy Machine Gun Corps, later to become the Tank Corps. It was one of seven tanks assigned to the Canadian 2nd and 3rd Divisions for their attack on Courcelette, and German positions to the south and east of the village on 15 September 1916. The 2nd Division attacked from prepared positions across the Albert to Bapaume road toward Bapaume and to the north of the road with the village of Courcelette as their first objective. Of the seven tanks assigned to the attack on Courcelette, one broke down before the attack, three became bogged in German trenches, two reached Courcelette, although only one was still in action beyond Courcelette. C1 was commanded by Lieutenant (Lt) A. G. C. Wheeler, Machine Gun Corps (MGC), and the crew from the MGC included, 2527 Sergeant F. J. Saker, 2801 Gunner (Gnr) E. H. Bax, 2720 Gnr W. N. Smith, 2736 Gnr F. C. Stone, 2602 Gnr G. G. Lloyd, 2752 Gnr H. Rothera and the driver M2/105514 Private (Pte) H. Brotherwood, Army Service Corps. Lt Wheeler and his crew reached their start position at 0400 on the extreme left of the divisional area after moving through the ruins of Pozieres. C1's steering had been damaged by German shellfire during the night and although this had been repaired the driver Pte Brotherwood must have had a very difficult time keeping the tank on track, avoiding old trenches, the many shell craters and the growing number of Canadian causalities falling in the tanks path. The terrain was so difficult that the tank could not keep up with the infantry and the speed was reduced to around 10 yards per minute until at about 0700 when the tank bellied out and although the tracks were still turning the tank had stopped. Lt Wheeler later placed the tank at map reference R35a 3.9. The crew tried to dig the tank out, but after laboring for four hours and just as Lt Wheeler was about to abandon the task, a shell landed nearby and a fragment severed Pte Brotherwood's jugular; he died two minutes later. The tank was abandoned on the battlefield. Pte Brotherwood is buried in the Pozieres cemetery. This action on 15 September 1916 at Flers and Courcelette was the first time tanks were used on the Western Front. The Tank Corps Memorial, commemorating this action, is near the Windmill site on the Albert to Bapaume Road, just to the east of Pozieres, not far from where this photograph was taken. Source: The Tanks at Flers by Trevor Pidgeon, Fairmile Books Cobham, England. Pp 125-128
This is an original Paget Plate negative. The same image is available in colour and is held at P03631.210.