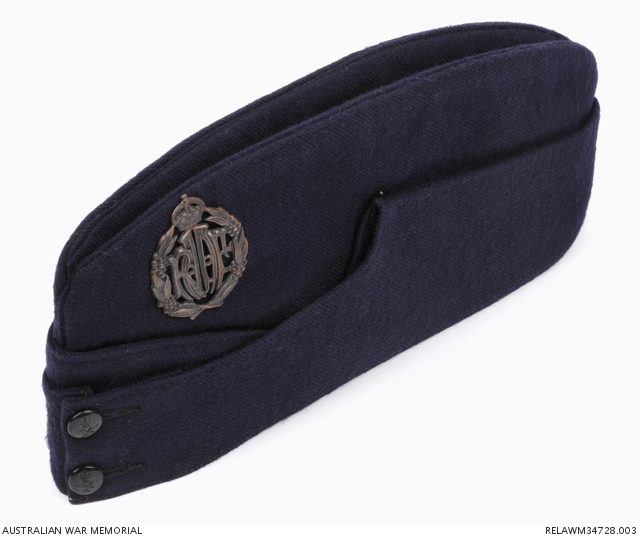 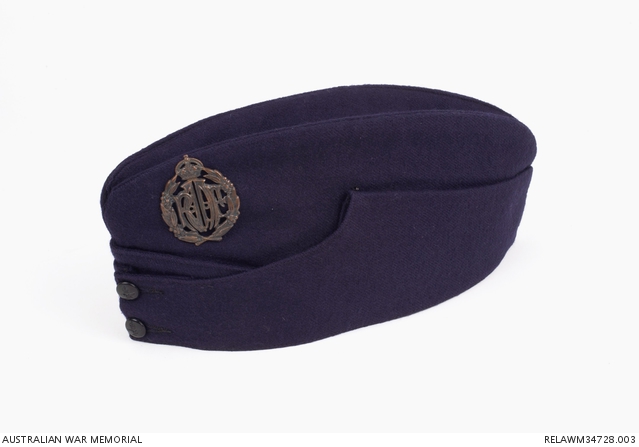 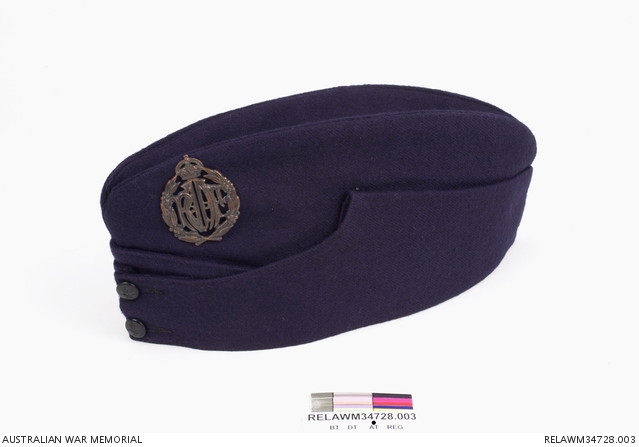 RAAF blue Other Ranks' woollen forage cap with oxidised brass RAAF badge on left hand side. The two buttons at the front are made of black plastic. The cap is lined with black cotton fabric. An oval shaped white cotton maker's label is sewn inside the left hand side.

Rawdon Hume Middleton was born at Waverley, New South Wales, in July 1916, but moved with his family to the Parkes district while still a child. A keen sportsman, he was working as a jackeroo when the Second World War broke out. In October 1940 he enlisted in the RAAF, and as an Empire Air Training Scheme cadet pilot, was trained in Australia, Canada and the United Kingdom. In early 1942 he was posted as a Flight Sergeant to his first operational unit, 149 Squadron RAF, flying Short Stirling bombers out of Mildenhall and nearby Lakenheath in Suffolk. For some months he gained experience flying operationally as a second pilot, but by the end of July was captain of his own crew, which he led on a number of missions over Germany and Italy. On the night of 28-29 November 1942, he and his crew set out to raid the Fiat works in Turin, Italy. Their heavily laden aircraft was barely able to make the climb over the Alps, and was then badly damaged by flak over the target, Middleton, his second pilot and the wireless operator all being wounded by a shell which burst in the cockpit. Despite terrible wounds to his head, Middleton determined to make the return flight to England, in order that his crew should have the best chance of survival. Upon finally reaching the English coast, having been further damaged by flak in crossing the French coast, and with only five minutes' fuel remaining, he ordered the crew to bail out, the front gunner and flight engineer remaining in the aircraft to assist their captain. The Stirling then crashed into the sea, and all three were killed. Middleton's body was not recovered from the ocean until February 1943, and he was buried at Beck Row, Suffolk, not far from his base at Mildenhall. Although the citation for the Victoria Cross and the uniform tunic show the rank of Flight Sergeant, Middleton was in fact granted a commission back-dated to 15 November 1942.