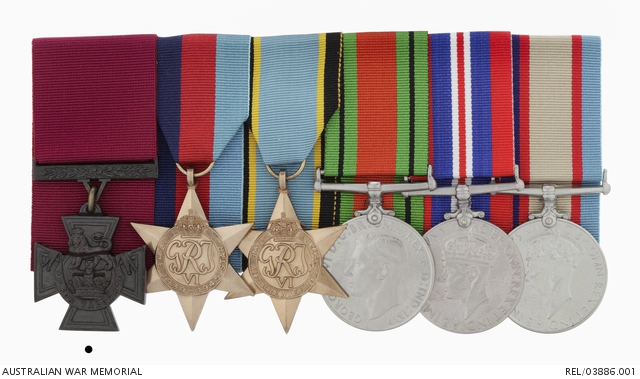 Rawdon Hume 'Ron' Middleton was born on 22 July 1916 at Waverley, Sydney, the great-nephew of explorer Hamilton Hume. He was a jackeroo before enlisting in the RAAF in late 1940 and after training in Australia, Canada, and Britain, he joined No. 149 Squadron, RAF.

Middleton’s 29th mission was a raid on Turin, Italy on the night of 28/29 November 1942. His aircraft was damaged by flak over the target and a shell exploded in the cockpit, wounding him in the face and destroying his right eye. Despite horrific injuries and a temporary loss of consciousness he recovered sufficiently to take control and pilot the crippled aircraft back towards England.

Over the English Coast, with little fuel left, Middleton ordered the crew to abandon the aircraft. Most escaped, but Middleton was killed when the bomber crashed into the sea. For his actions he was awarded a posthumous Victoria Cross. The recommendation for the award reads:

‘On the night of 28-29 November 1942, Flight Sergeant Middleton and his crew were detailed to carry out a low-level attack against the large Fiat Works to the south of Turin in a Stirling aircraft, H-149 Squadron.

The aircraft and crew took off at 1814 hours on 28 November and set course for the target. On the way across France it was found that great difficulty was experienced in climbing the aircraft to a height of 12,000 feet and an excessive amount of fuel had been used to climb the aircraft and hold her at this height. However, no further height could be gained and the crossing of the Alps by way of the Mont Cenis Pass was attempted.

At this time the flight engineer and navigator calculated that with the remaining fuel the aircraft would be unable to return to base but would just be able to return to Manston. The aircraft was then half way over Mont Cenis Pass. It was an extremely dark night and the tops of the Alps were only just discernable. The bomb doors were opened with the intention of jettisoning the bomb load and returning when the front gunner reported ‘Flares ahead’. The captain immediately ordered the bomb doors to be closed and decided to continue to his target.

As they approached the target, the town of Turin was easily seen and height was lost down to 2,000 feet to commence the search for the Fiat factory some two miles to the south. This loss of height to locate and bomb the target was yet another indication of Flight Sergeant Middleton’s determination to find and hit the target, for, being short of petrol, he must have realised that he could not afford to use any petrol to climb back over the Alps. The target proved extremely difficult to find and the aircraft was flown across Turin three times at this low height during the course of the search. Approximately fifteen minutes after arriving over Turin, the captain, Flight Sergeant Middleton, managed to identify the target and he told his crew this fact. At almost the same moment they were heavily engaged by a number of light anti-aircraft guns when the aircraft was crossing the marshalling yards to the south of Turin. The aircraft was hit first and badly holed in the port main-plane causing some difficulty in lateral control. Flight Sergeant Middleton called on Flight Sergeant Hyder, the second pilot, to assist him, when another light anti-aircraft shell entered the pilot’s cockpit from the port side shattering the windscreen beside the captain. The shell burst in the centre of the cockpit wounding both pilots. The aircraft was still being heavily engaged sustaining many hits in the fuselage and one on the gun mounting in the rear turret, and the wireless operator, Pilot Officer Skinner being wounded in the leg.

Flight Sergeant Middleton was rendered unconscious by the wounds that he received and the aircraft dived to within 800 feet of the ground before control was regained by Flight Sergeant Hyder. He decided that it would be impossible to attack the Fiat Works and in order to make use of the bomb load he closed the bomb doors and started to climb. The bombs were dropped shortly afterwards from 1,500 feet on the outskirts of Turin. Flight Sergeant Middleton then recovered consciousness and in his dazed state gave the order to abandon aircraft. This order was immediately countermanded by Flight Sergeant Hyder who also stated that he had been hit. This was the first intimation to the remainder of the crew that anyone had received wounds.

The aircraft all this time had been subjected to the most intense and accurate light anti-aircraft fire and sustained further hits, probably from 20 mm weapons. The three gunners in the aircraft replied continuously against ground targets with their serviceable guns until the rear turret was put out of action by a hit which destroyed the servo-feed and jammed the belts.

Flight Sergeant Middleton asked the navigator for a course to steer, which was given to him; this was placed on the compass for him by the front gunner, Sergeant Mackie, as Flight Sergeant Middleton had stated that he could only see with difficulty. It was then discovered how seriously Flight Sergeant Middleton had been wounded. A piece of shell splinter had torn into the right side of his face, destroying his right eye and completely exposing the bone over the eye. The remainder of the crew are of the opinion that he was also wounded in the body or legs, but they were unable to ascertain this throughout the remainder of the flight as Flight Sergeant Middleton either could not or would not leave the controls. He requested that the crew talk to him as little as possible as he could not answer them without further loss of blood and great pain. It seems evident that both the first and second pilots were badly hit and very exhausted, and that in the case of the captain, Flight Sergeant Middleton, with his face smashed and one eye blown out, he would have been able to see very little. It is believed that Sergeant Mackie not only guided the aircraft through the Alps but stood by the captain throughout the flight home to the bitter end.

Having set course for base from the target, difficulty was again experienced in climbing the plane, considerable lift having been lost from the large hole in the port main-plane. Everything possible, guns, ammunition and armour plate was jettisoned to enable the aircraft to gain sufficient height for the return crossing of the Alps. At this time only 800 gallons of fuel remained and the crew faced a return journey of four and a half hours. In view of this, a discussion arose as to the best course of action to take. They could have baled out over Switzerland or crash-landed the aircraft in the flat country of northern France. The captain, Flight Sergeant Middleton, ruled out any of these alternatives and said that he would fly the aircraft back to England. His actual words were "We will try to make our coast and you fellows can then bale out and save yourselves – I cannot get away with my wounds anyway."

The return journey across France was made at a height of 6,000 feet, taking four hours and ten minutes flying with Flight Sergeant Middleton at the controls the whole time. On the rare occasion that he spoke, the crew noticed that his voice was getting weaker and weaker each time. On crossing the French coast the aircraft was only six miles off track and crossed out over Dieppe. At a height of 6,000 feet the aircraft was heavily engaged and again hit by light anti-aircraft fire and held in a cone of searchlights. Flight Sergeant Middleton, however, managed to extricate the aircraft from this difficult position by diving to sea level and getting away from the defended locality by taking evasive action. They were able to climb again to 2,500 feet crossing the Channel and the captain ordered the crew to prepare for ditching or baling out. The escape hatch was opened and all preparation made for ditching.

During the flight across France and across the Channel, the wireless operator, Pilot Officer Skinner, although wounded and in considerable pain, managed to maintain wireless communication with base and to provide the navigator with a series of accurate fixes. When approaching the English coast, the flight engineer stated that he could only guarantee fuel for a further five minutes flying. The navigator, Pilot Officer Royde, warned the captain that he did not think that they would be able to reach an aerodrome, and that if they had to bale out, they should fly at least two miles inland because of the strong north-easterly wind blowing. Flight Sergeant Middleton then stated his intention of flying parallel to the coast while the crew were baling out and then heading the aircraft out to sea.

The aircraft turned onto a westerly course shortly after crossing the English coast and Flight Sergeant Middleton gave the order to abandon aircraft. His speech at this time had been most indistinct and he was obviously speaking with the greatest difficulty. The front gunner, Sergeant Mackie, stood by the front escape hatch and helped out the second pilot, navigator and wireless operator. The navigator had previously placed Flight Sergeant Middleton’s parachute beside him on the second pilot’s seat. The rear gunner and mid-upper gunner abandoned through the aft escape hatch.

It is believed that, at the time, the engines must have stopped through lack of petrol and the captain was then faced with an attempt to effect a safe landing in the dark – an almost impossible feat – or to try and ditch the aircraft in the sea. It appears that he chose the latter alternative. The wireless operator, Pilot Officer Skinner, was the last surviving member to bale out. He landed some 500 yards from the shore. The bodies of Sergeant Mackie and Sergeant Jeffery, who had stuck to their captain to the end, were recovered from the sea the following day. Flight Sergeant Middleton is missing and was presumably unable to get out of the aircraft.

For these acts of extreme gallantry, unselfishness and devotion to duty in the highest tradition of the Royal Air Force, Flight Sergeant Middleton is recommended for the award of the Victoria Cross.’

Middleton’s body was washed ashore near Dover months later and he was buried with full military honours in a churchyard near the squadron’s base at Mildenhall, Suffolk.

His Victoria Cross is accompanied by service medals for the Second World War.