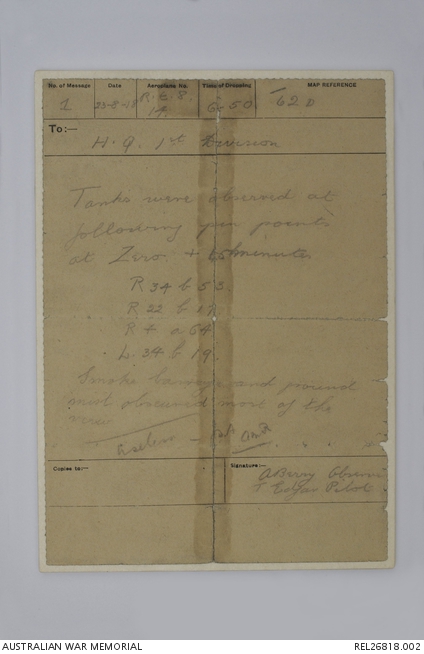 Message written in pencil on a paper message form which has black carbon backing. The message, which was dropped by a Royal Air Force RE8 aircraft at 6.50am on 23 August 1918, is marked with the map reference '62 D' and addressed to 'H.Q. 1st Division'. It states: 'Tanks were observed at the following four points at Zero + 45 minutes/ R 34 b 53. / R 22 b 17. / R 4 a 64. / L34 b 19. / Smoke barrage and ground mist obscured most of the view.'. It is signed with the names of the crew of the aircraft 'A Barry Observer' and 'T Edgar Pilot'. Another person (presumably the recipient on the ground) has written the word 'Useless' beneath the message.

Collected by 3556 Corporal Kenneth Reginald Richards, Headquarters, 1 Australian Division. Richards originally enlisted in the 1st Australian Pioneer Battalion in April 1915, served in France and was transferred to headquarters duties in August 1917. He returned to Australia on 12 April 1919. This message was dropped in a streamer (see REL26818.001) by a Royal Air Force RE8 aircraft ('No.14') to 1st Division Headquarters at 6.50am on 23 August 1918. 1 Australian Division was at this time enaged in a successful attack, supported by tanks, south of the Somme river in the area Chuignolles - Foucaucourt. The RE8 aircraft concerned probably came from 5 Squadron RAF, which had a 2nd Lieutenant A Barry among its observers during this period.