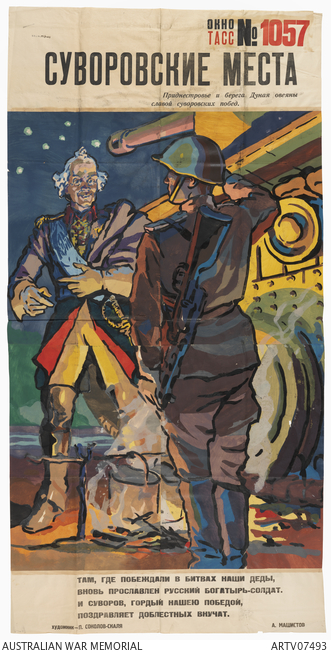 A Russian soldier of the Red Army stands to attention and salutes an apparition of the General of the Russian Empire, Aleksandr Suvorov (1729 - 1800). The only light source in the image comes from the campfire, allowing for the highlighting and shadows. Suvorov was used as a symbol of encouragement and propaganda by the Russians in the Second World War, as he was legendary for having never lost a battle during his military career; he became a Russian folk emblem similar to Uncle Sam of the United States. The poem underneath the image was written by Aleksei Mashistov, and translates to: 'Suvorov's Haunts / The area around the Dnieper and the banks of the Danube are radiant with the glory of Suvorov's victories. / Where out grandfathers were victorious in battle, / Again the Russian knight has earned soldierly glory. / And Suvarov, proud of our victory, / Congratulates his valiant grandsons.'