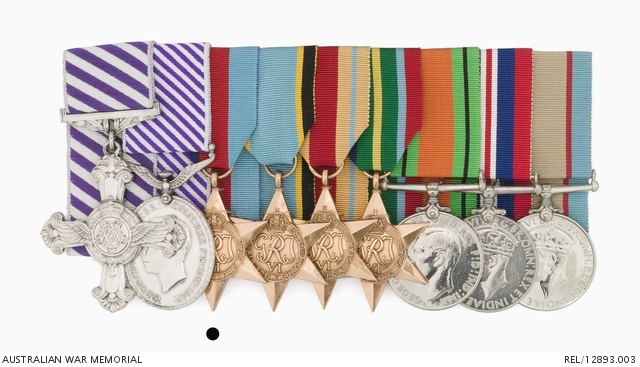 402500 Squadron Leader Adrian Philip 'Tim' Goldsmith was born in April 1921 and enlisted in the RAAF in September 1940. He served briefly as a Sergeant pilot with 234 and 242 Squadrons, RAF flying Spitfires and Hurricanes in England, before being transferred in February 1941 for service on the island of Malta with 126 Squadron RAF, again flying Hurricanes and Spitfires. He was awarded the Distinguished Flying Medal for actions flying out of Malta (Sergeant 126 Sqn, RAF) in May 1942. Commissioned the same month, he was awarded the Distinguished Flying Cross in June 1942, (Pilot Officer 126 Sqn, RAF) and had 12 1/4 confirmed victories before he left the island in July. In February 1943 he joined 452 Squadron, RAAF, part of No.1 Fighter Wing at Darwin (the first Spitfire Wing in the Pacific). During this period he shot down a further four Japanese aircraft, but was himself shot down into the sea in May 1943, spending 24 hours in a dinghy before being rescued. By the time he was discharged on medical grounds in 1945, Goldsmith was the second highest scoring Second World War Australian air ace, credited with destroying 17 aircraft (16 plus one shared), two probables and seven damaged. He died in 1961.