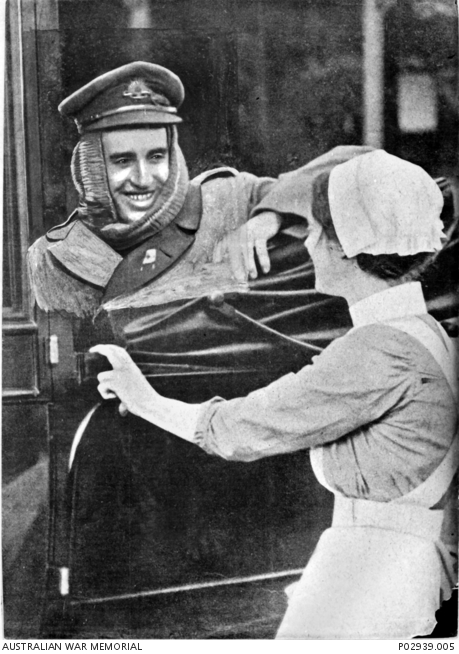 Portrait of Second Lieutenant (2Lt) Hugo Vivian Hope Throssell VC, 10th Light Horse Regiment, in a car, smiling down at a nurse. 2Lt Throssell was awarded the Victoria Cross "for most conspicuous bravery and devotion to duty during operations on the Kaialij Aghala (Hill 60) in the Gallipoli Peninsula on 29th and 30 August 1915". 2Lt Throssell was severely wounded in several places during an enemy attack, but refused to leave his post or obtain medical attention until the danger had passed. After having his wounds dressed he returned to the firing line until he was ordered out of action by the Medical Officer, later being evacuated to a hospital in England. He contracted cerebrospinal meningitis and although recovered, he was invalided to Australia and allocated light duties. He returned to the 10th Light Horse on 22 January 1917, in charge of reinforcements, and was again wounded in the Battle of Gaza, in which his brother was killed on 19 April 1917. He suffered another breakdown in health and was returned to Australia where his AIF appointment was terminated on 13 February 1919, he later died at his property on 19 November 1933.