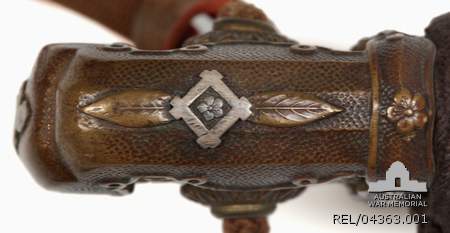 Japanese Shin-Gunto officer's sword with standard military fittings of a pierced tsuba (guard), five sepa, and cherry blossom menuki (hilt ornaments) on the white same (ray skin) under the brown binding on the handle. The kabuto-gane (pommel) has a mon (family crest) of a cherry blossom within a diamond. There is a straight harmon pattern on the edge of the blade. The habaki (blade collar) is gold foil over copper with diagonal 'scratch' marks. A red and brown sword knot tassel is attached to the cord sarute (loop) on the kabuto-gane.

This sword was carried by Colonel Aikyo commander of the Japanese garrison at Miri, Sarawak, Borneo. It was surrendered to Major-General Windeyer, KBE, CB, DSO, ED at Kuala Belait, Brunei, Borneo on 20 September 1945. Accused of war crimes, Aikyo committed suicide during the night of 23 October 1945 at Labuan POW compound.