A Wight 'Converted' two seater Seaplane in flight over two taxiing Short 184 Seaplanes. As its ... 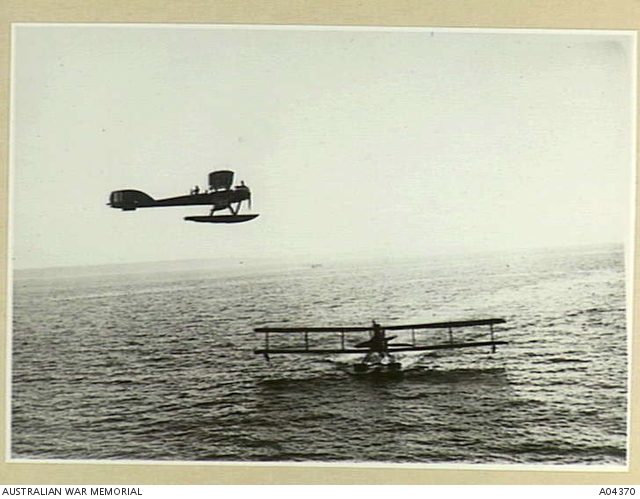 A Wight 'Converted' two seater Seaplane in flight over two taxiing Short 184 Seaplanes. As its name implies, the Wight was converted from land-based bomber configuration, mainly by the simple expedient of converting the undercarriage, although the top wing king-posts were strengthened at the same time (one of which is visible in the photograph). The aircraft takes its name from the Isle of Wight, where manufacturers J Samuel White and Co were based. Note the observer, facing rearwards, standing in the rear cockpit. Used as a naval patrol aircraft by 243 and 233 Squadrons of the Royal Naval Air Service (RNAS), the Wight was powered by a 322 hp Rolls Royce Eagle VI or a 265 Sunbeam Maori engine and 37 saw service during 1917 and 1918. The torpedo-carrying Short 184 Seaplane was produced in much larger numbers (over 650 were built) and proved the mainstay of the RNAS, seeing service from the English Channel to the Dardanelles and Mesopotamia. In service from 1915 until 1918, the type was progressively improved with six different engines variously employed to improve performance.