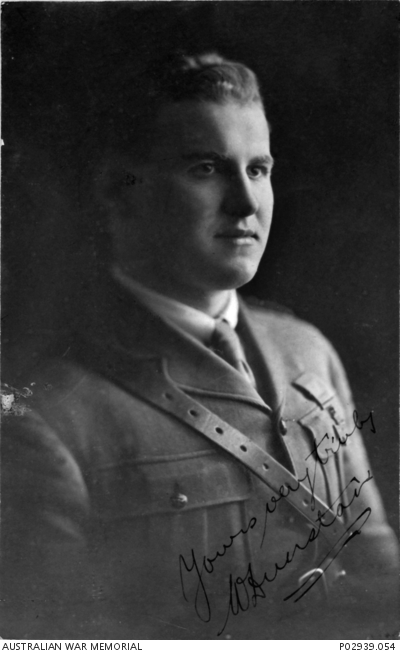 Studio portrait of Corporal (Cpl) William Dunstan VC, 7th Battalion. Cpl Dunstan was awarded the Victoria Cross (VC) for "most conspicuous bravery at Lone Pine Trenches, on the 9th August, 1915". Cpl Dunstan along with Lieutenant Tubb and Cpl Burton held a newly captured trench during an early morning enemy counter attack. Lt Tubb was wounded in the head and arm and Cpl Burton was killed. Cpl Dunstan was also wounded in the head and temporarily blinded in the attack and was sent back to Australia on on 1 February 1916. He died on 3 March 1957 in Victoria. Cpl Burton was posthumously awarded the VC for his part in the defence of the trench. The photograph is inscribed "Yours very truely W. Dunstan".