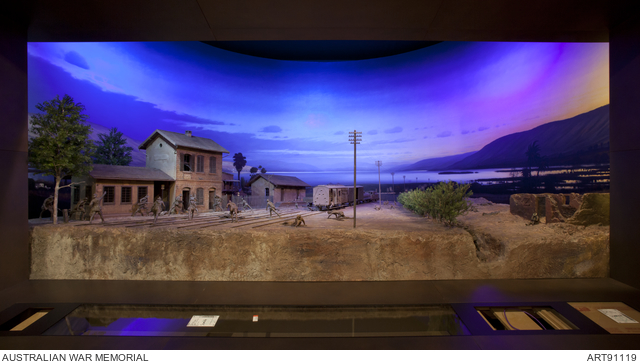 On 25 September 1918, Semakh was the scene of a short action between Australian light horsemen and a mixed force of Turks and Germans. Located at the southern end of Lake Tiberias (the Sea of Galilee), Semakh was significant due to its position on the Damascus railway line. The Germans had added machine-gunners to the small Turkish garrison and command was entrusted to a German officer.

As part of the Australian War Memorial's First World War Gallery redevelopment, artist Alexander McKenzie (b. 1971) was commissioned in 2013 to produce a new background for the Semakh diorama. McKenzie travelled to the site of Semakh to observe the scale of the landscape and get a sense of the atmosphere at dawn.