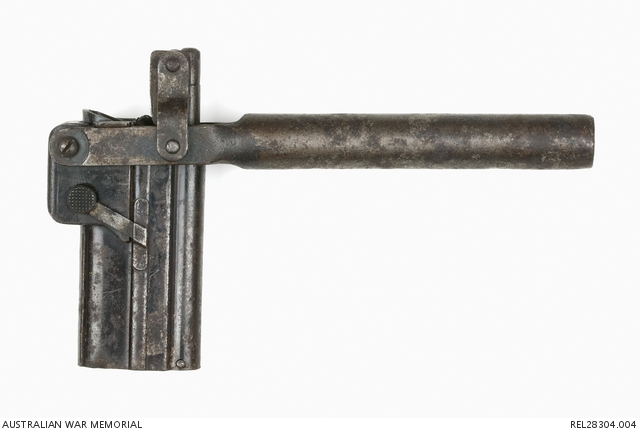 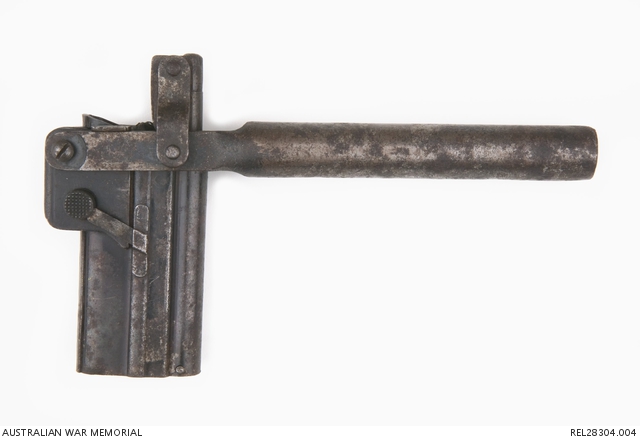 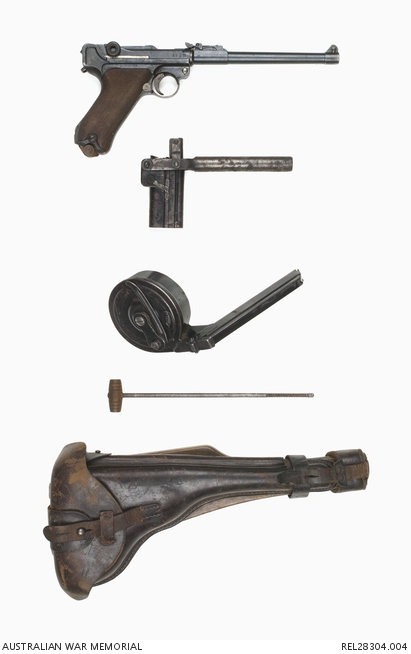 Luger LP08 Artillery Model Pistol Magazine reloading tool. Designed in pressed steel to slide over the feed way of a 'Trommelmagazin 08', thirty two round 'snail' magazine. When fitted to the magazine, 9mm rounds are loaded from the top and pushed into the magazine using the attached spring loaded handle that is a right angles to the body.

This German officer’s pistol was captured by 4988 Private Albert 'Bert' Broadhead, 20 Battalion on 15 April 1917 at Vaux-Vraucourt in France. Arthur Albert Broadhead, a 21 year old carpenter of Cooma, NSW, enlisted on 22 November 1915 at Casula. He was assigned to B Company, 20th Battalion and after training, embarked on 8 July 1916 from Sydney as part of the 13th reinforcements for that battalion. He spent September and October in training in England before transferring to France in November, finally joining his battalion in the field on 12 December.

In April 1917, the 20th Battalion was in the lines at Vaux-Vraucourt, to the northeast of Bapaume, in the aftermath of the German’s retirement to the Hindenburg Line. At 4:30am, German forces broke through the Australian lines and captured all of the 2nd Field Artillery Brigade’s guns. Counter attacks by the 19th and 20th Battalions drove off the enemy, re-captured the guns and took a large number of prisoners, and the original front line was regained. It was during this action that Private Broadhead captured this German officer’s Luger Artillery pistol, complete with its holster, ‘snail’ drum magazine (which held 32 rounds) and cleaning gear.

The spring of 1918 brought the German ‘Michael’ March offensive. The 20th Battalion was one of many Australian battalions rushed to stop it, and it encountered some particularly severe fighting when ordered to attack at Hangard Wood on the morning of 7 April. The unit war diary records that heavy enemy counter-attacks forced the battalion’s companies to withdraw with 150 casualties; with 30 killed in action. Private Broadhead received a gunshot wound to his right arm and was evacuated; he did not rejoin his unit until 7 July. Broadhead returned to Australia aboard the transport ‘Miltiades’ in June 1919 and was discharged from the AIF on 22 September.

Bert Broadhead returned to his family's timber milling business in Cooma and Adaminaby after the war; he died in 1982.