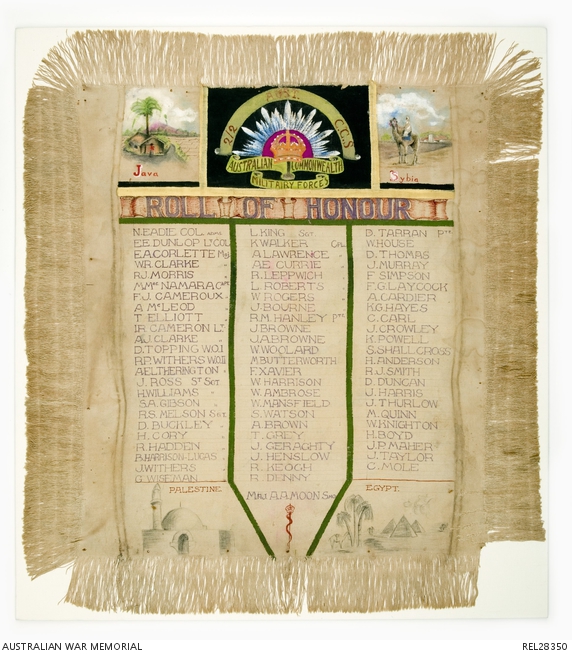 Nominal roll of officers and men of 2/2 Casualty Clearing Station in Java in 1942. The roll has been drawn and illustrated with small paintings on a piece of khaki kitbag that has been frayed at the edge to create a fringe. Painted in the middle at the top is the 'Rising Sun' badge of the Australian Army with '2/2 AUST. C.C.S.' in a crescent above it. On the right side is a image of an arab mounted on a camel with buildings in the background, titled 'Sybia' (sic). To the left of the badge is an image of an attap hut beneath a palm tree set in rice paddies with mountains in the background. This image is titled 'Java'. A title scroll 'ROLL OF HONOUR' underscores all of these elements. There are three columns of names below this, including, Colonel N Eadie, Lieutenant Colonel E E 'Weary' Dunlop and Major A A Moon. In the bottom left corner is a pencil drawing of a mosque, which is titled 'PALESTINE'. In the bottom right corner is a drawing which shows palm trees and three pyramids. It is titled 'EGYPT'. The columns are divided by a painted green stripe which also underlines the title scroll. Other names listed are Majors E A Corlette, W R Clarke and R J Morris; Captains M MacNamara, F J Cameroux, A McLeod and T Elliot; Lieutenants I R Cameron and A J Clarke; Warrant Officers D Topping, R P Withers and A Eltherington; Staff Sergeants H Williams and S A Gibson; Sergeants R S Melson (Sic - true spelling Melsom), D Buckley, H Corey, R Hadden, B Harrison Lucas, J Withers, G Wiseman and L King; Corporals K Walker, A Lawrence, A E Currie, R Leppwich, L Roberts, W Rogers, and J Bourne; and Privates R M Manley, J Browne, J A Browne, W Woolard, M Butterworth, F Xavier, W Harrison, W Ambrose, W Mansfield, S Watson, A Brown, T Grey, J Geraghty, J Henslow, R Keogh, R Denny, D Tarran, W House, D Thomas, J Murray, F Simpson, F G Laycock, A Gardiner, K G Hayes, C Carl, J Crowley, K Powell, S Shallcross, H Anderson, R J Smith, D Duncan, J Harris, J Thurlow, M Quinn, W Knighton, H Boyd, J P Maher, J Taylor, C Mole.

Associated with QX19300 Private Walter 'Wally' Woolard, 2/2 Casualty Clearing Station. He enlisted in the Second AIF at Brisbane on 19 May 1941 and was taken on strength of the Australian Army Medical Corps on 31 May 1941, serving in in Egypt, Syria, and Palestine before being transferred to the Dutch East Indies. His unit was captured by the Japanese in Java in March 1942 and was initially held in a prisoner of war camp at Bandoeng. Too sick to move out of Bandoeng with his unit, to Singapore, Woolard secretly drafted the roll as a reminder of the men he had served with, and successfully hid it from the Japanese even when he was moved between camps. A French internee named Pierre painted the pictures using paints made from anything that the prisoners could scrounge. Private Woolard suffered many illnesses during his captivity and was freed by elements of the Dutch Air Force on 22 August 1945. Due to his poor health it was necessary for him to spend time recovering in hospital in Borneo before being repatriated to Australia. He died in March 1999.