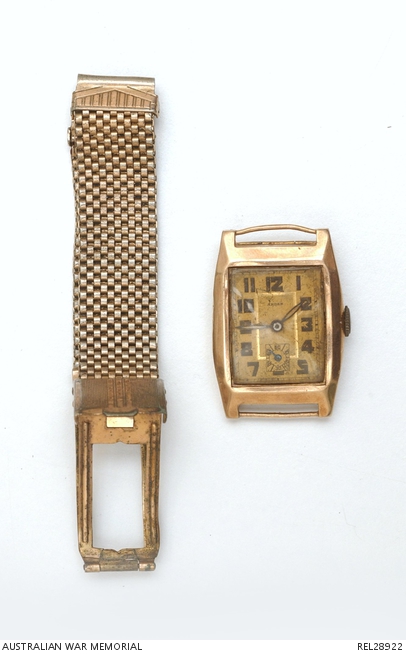 Rectangular shaped watch with a detached band made of finely linked chains. The face of the watch is coloured gold with black numerals around a lighter coloured inner border. The hands are pointing at a quarter to two. The back of the watch has been engraved with '420817 R. KINGSTON RAAF'.

Roy Albert Kingston enlisted in the Royal Australian Air Force on 5 December 1941. On the night of 19/20 February 1944 Kingston (who was now attached to 166 Squadron) was piloting Lancaster ME627 AS-Z on a long range bombing mission to Leipzig. Leipzig was home to the Erla Maschinenwerk that was producing the Messerschmitt Bf109 under license at three locations in the city. AS-Z was shot down over Markranstaedt with all crew killed. Kingston is buried in the Berlin 1939-1945 Cemetery.