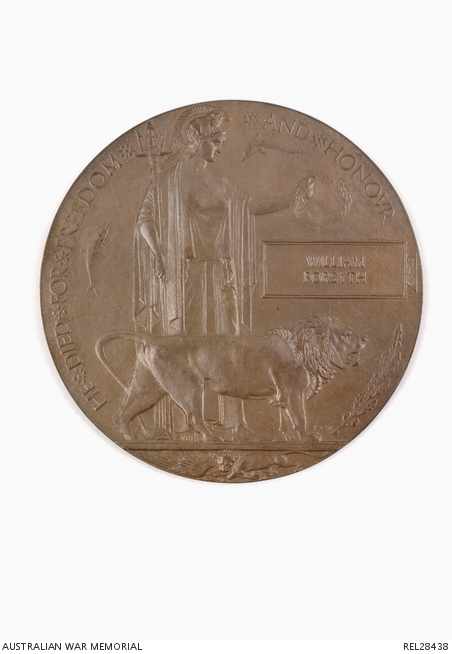 Bronze next of kin plaque, showing on the obverse, Britannia holding a laurel wreath, the British lion, dolphins, a spray of oak leaves and the words 'HE DIED FOR FREEDOM AND HONOUR' around the edge. Beneath the main figures, the British lion defeats the German eagle. The initials 'ECP', for the designer Edward Carter Preston appear above the lion's right forepaw. A raised rectangle above the lion's head bears the name of the dead soldier 'WILLIAM FORSYTH'.

Born in Liberton, a parish of Edinburgh, Scotland in 1880, William Forsyth had served for 13 years as a able seaman in the Royal Navy, when he emigrated to Australia in 1910. Employed in Sydney as a motor launch driver he married Margaret Keith Glennie on 23 July 1915, the day before he enlisted in the AIF. After initial training he was posted a private, service number 3047, to the 10th Reinforcements to the 2nd Battalion. He sailed from Sydney on 8 October 1915, aboard HMAT A69 Warilda.

Forsyth joined his battalion in Egypt at the beginning of February 1916. Just over a week later he was transferred to 54th Battalion, then, a month later was posted a bombardier to the 5th Division's 56th Artillery Battery. The battery left Egypt for France on 19 June. Five weeks later Forsyth was promoted corporal and transferred to V/5A Heavy Trench Mortar Battery. He was promoted sergeant in November. In June 1918 Forsyth was mentioned in Australian Corps Routine Order No A165 for gallantry in the field near Corbie on 27 May 1918.

Forsyth, by now the battery sergeant and acting sergeant major, was mortally wounded in front of Bayonvillers, between Lihon and Harbonnieres on 9 August when a faulty round caused a mortar to explode. The crew were killed instantly. Evacuated to the 8th Field Ambulance with multiple shrapnel wounds, and then on to the 20th (British) Casualty Clearing Station, Forsyth did not recover consciousness and died there the same day. He is buried in the Vignacourt British Cemetery.

This commemorative plaque was sent to his wife in November 1922.