The remains of RE8 C4580 which was shot down at Hamel Wood, by the enemy, after it had succeeded ... 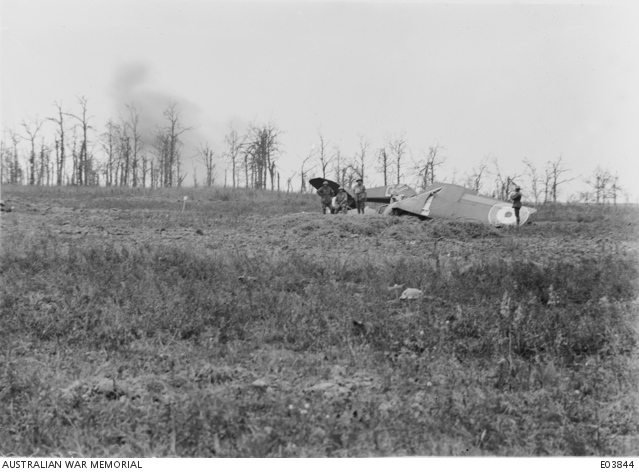 The remains of RE8 C4580 which was shot down at Hamel Wood, by the enemy, after it had succeeded in dropping ammunition to the forward troops by means of parachutes. One of the parachutes can be seen caught in the tree tops in photo E03845, taken on the same day. This aircraft was flown by 9 Squadron Royal Air Force (RAF) during the Battle of Hamel and used for ammunition drops to the forward troops. C4580 was piloted by Lieutenant (Lt) S E Harris with observer, Lt D E Bell (America). C4580 departed 9 Squadron's aerodrome at Argenvillers at 3.45am on 4 July to 3 Squadron AFC's aerodrome at Villers Bocage, which took them an hour. During the ammunition drops, each aircraft carried two boxes of ammunition, each containing 1000 rounds. They took off for their first ammunition drop at 6.35am, successfully dropping two boxes at 62D P.4c.32.58, just north of Hamel. They returned to Villers Bocage and reloaded before taking off for their next run at 9.05am. By the time they reached their drop area, about 20 German aircraft had arrived at the battlefield and held air superiority for a period. C4580 was shot down and crashed just south of Hamel. Leutnant Martin Dehmisch from Jasta 58 was credited with this ‘kill’, However the ‘kill’ is recorded as taking place at 10.30am, over an hour after Lt Harris and Lt Bell were shot down, and may be a mistaken reference to the attack on the RE8 C2347, piloted by Lt H Pryce, which was attacked by 3 Pfalz scouts around 10am. Lt Pryce was wounded in the attack but managed to fly his aircraft back to Villers Bocage. Lt Harris is buried at Villers-Bretonneux Military Cemetery in plot 15, row A, grave 7.