Stretcher bearers of the 11th Australian Infantry Brigade bringing back a wounded man, past R.E.8 ... 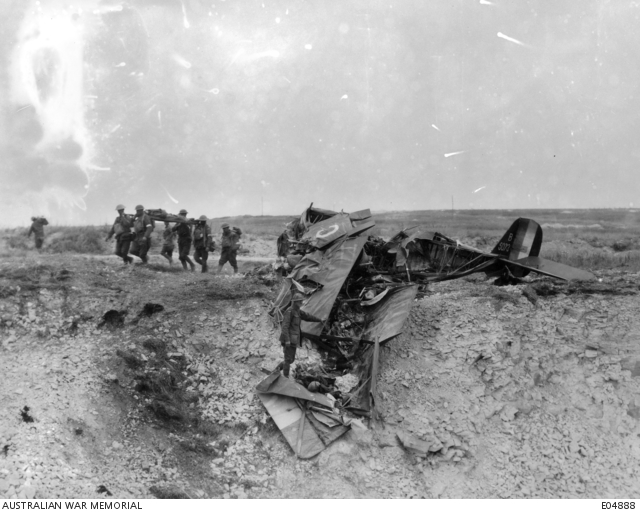 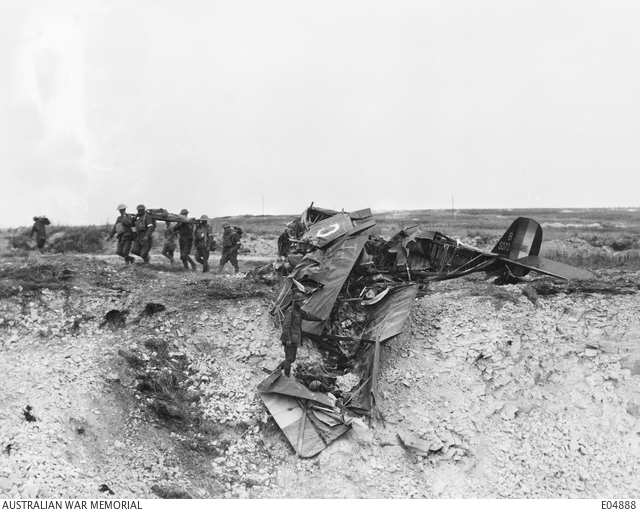 Stretcher bearers of the 11th Australian Infantry Brigade bringing back a wounded man, past R.E.8 Serial B5073, which was shot down near Hamel, during the battle on 4 July. Note individual aircraft letter 'C' on the centre section. This aircraft was flown by 9 Squadron RFC during the Battle of Hamel and used for ammunition drops to the forward troops. The pilot was Lieutenant (Lt) Harry Heatly Riekie (aged 22) and the observer was Lt William Knowles. B5073 departed 9 Squadron's aerodrome at Argenvillers at 5am on 4 July to 3 Squadron AFC's aerodrome at Villers Bocage, a 35 minute flight. Each aircraft carried two boxes of ammunition, each containing 1000 rounds. They took off for their first ammunition drop at 6.55am, successfully dropping a box at 62D P.4d.4.0 and P.10a.6.5. - one drop within Hamel village, the other, north east of the village. They returned at 7.55am. At 8.55am B5073 took off again to drop ammunition. The aircraft dropped its two boxes of ammunition, however it seems that one of the parachutes may have caused the aircraft to crash. Eyewitnesses from A Company, 43rd Battalion reported that one of the parachutes appeared to foul the aircraft, which tilted, and fabric was torn away from its right lower wing. The aircraft attempted a spiral descent but could not be righted. It nosedived and crashed on the hill east of Hamel (around map reference 62D P.10b.2.9). Lt Riekie has no known grave and his name is on the Arras Flying Services Memorial. Lt Knowles is buried at Villers-Bretonneux Military Cemetery in plot 17 row B grave 8.