Portrait of an Reginald Garth, a 12 year old Perth boy who stowed away on the transport RMS ... 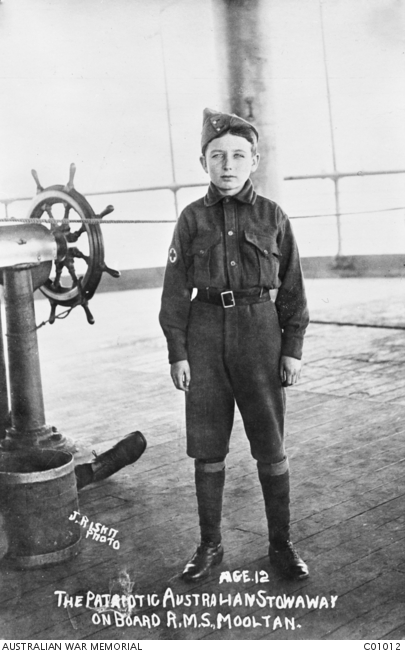 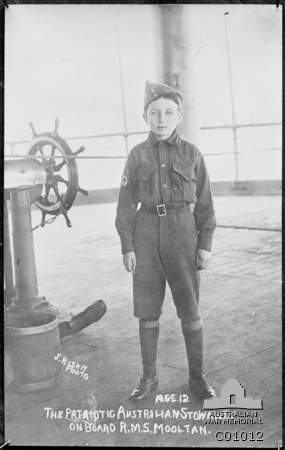 Portrait of an Reginald Garth, a 12 year old Perth boy who stowed away on the transport RMS Mooltan. He is wearing a uniform that was especially made for him by soldiers on board ship once he was discovered. A fuss was made of him and Colonel Fiaschi who was on board was willing to take him to Egypt as a bugler, but, at the request of his parents, Reginald was off-loaded at Colombo and returned to Australia aboard the Mongolia. His three brothers and father enlisted for the First World War and he wanted be part of what he thought might be the same adventure. However Reg's father 782 Sergeant Thomas James Garth was killed 3-6 November 1916 and his brother 2298 Gunner Frank Garth was killed in action on 10 December 1916; another brother, 216 John Garth, was severely wounded and discharged from the army in 1917. 2149 Thomas Garth served with the 8th Battery, 3rd Field Artillery Brigade, but following the death of his father and brother and another brother wounded, requested permission to return to look after the family; this was approved and in 1917 he returned and was discharged.