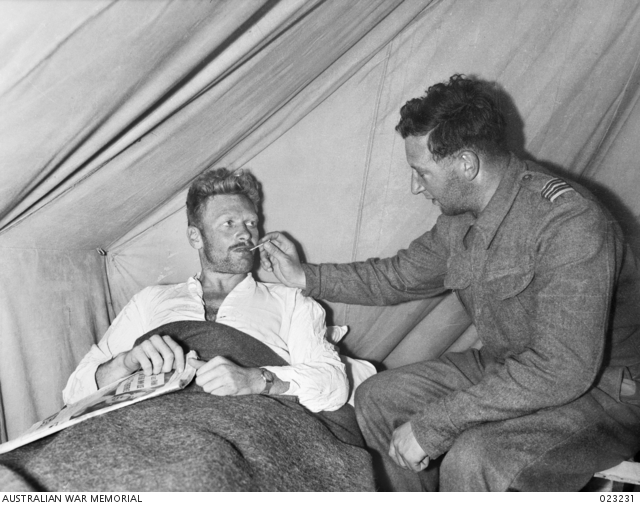 O35392 Flying Officer (FO) Andrew William ‘Nicky’ Barr rests in a tent after traveling three days through enemy territory after his aircraft was shot down. He has his temperature taken by Squadron Medical Officer, 251560 Flight Lieutenant Harold Crowcombe Stone. Born in Wellington, New Zealand, on 10 December 1915, Andrew William Barr grew up in Melbourne, Victoria. In 1939 Barr was selected to play hooker for the Wallabies Rugby Team on their second tour of England. The Wallabies arrived at Southampton, England, on 2 September 1939 and when war was declared on Germany the following day the tour was canceled and the Wallabies returned home to Australia. Barr enlisted in the RAAF on 4 March 1940 and was commissioned as a Pilot Officer. He joined No 23 Squadron and flew Wirraway aircraft on patrols of the Queensland coast but demanding more action he joined No 3 Squadron in the Middle East. After being shot down and wounded on 11 January 1942 he was able to make his way back through enemy lines, after the third day he reached allied territory bringing back valuable reconnaissance information. He was awarded the Distinguished Flying Cross (DFC) for his ‘great courage and tenacity’ and made the rank of Flight Commander. In May 1942 after destroying an Italian fighter near Tobruk, he made an emergency landing in the desert to make repairs to his Kittyhawk aircraft. With enemy tanks fast approaching, he managed to take off before the repairs were complete and nurse his aircraft back to base. The following day he achieved the rank of Squadron Leader, just six months after he had become a junior Pilot Officer. On 10 June 1942 Barr was hit by ground fire while escorting heavy bombers and crash landed. He was taken prisoner of war (POW) by Italian troops and escaped on three occasions, once from a moving train, and was recaptured before finally breaking through German lines with ten other prisoners. He was awarded both the Military Cross (MC) and a Bar to his DFC. Late in 1944 he returned to Australia as Chief Instructor, Fighter Operations, and flew fighter aircraft in New Guinea until his discharge on 8 October 1945. During his RAAF career Barr received the nick name ‘Nicky’ in reference to ‘Old Nick’, the Devil, and a reputation for his bravery, dedication and great sense of humour. He became No 3 Squadron's top scoring pilot, credited with destroying at least twelve enemy aircraft. After his discharge from the RAAF, Barr became involved in the oilseed industry and the development of the Murray Valley Basin in Victoria. He was appointed to chief executive of Meggitt Ltd and Australian representative and chairman of the International Oil Seed Group. For his services to the industry he was awarded the Order of the British Empire (OBE) in 1983. Nicky Barr died on 12 June 2006, aged 90.