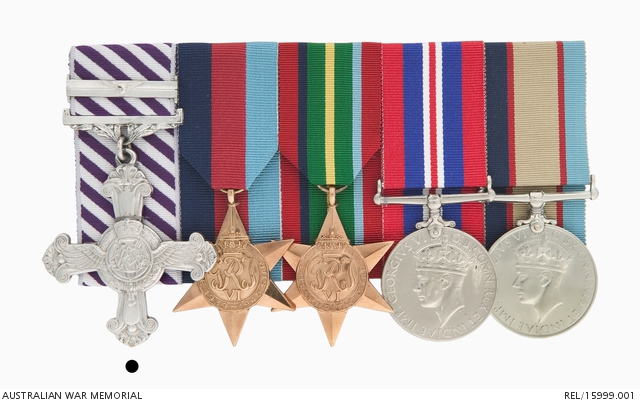 385 Wing Commander Charles Cuthbertson Learmonth (b 2 May 1917) enlisted 19 July 1938 in the RAAF. In December 1939 he joined 14 Squadron RAAF and was later posted to 22 Squadron RAAF (Bostons) New Guinea, where he commanded the Squadron in 1943. After October 1943 he rejoined 14 Squadron RAAF (Beauforts) as the Commanding Officer. He was killed on 6 January 1944 in a Beaufort Mark VIII (A9-346) which crashed into the sea off Rottnest Island, WA, during a formation practice flight. During 1942 and 1943 many Beauforts disappeared on both operational and training flights in mysterious circumstances. Learmonth supplied a running commentary as his plane fell from the sky which led to the discovery of the problem. Mild steel instead of high tensile steel spring washers had been specified for the elevator trim tab control cable support. Failure of this component had led to the elevator tab flicking up or down, instead of merely streaming, initially provoking uncontrollable porpoising and eventually leading to an irrecoverable dive. Awarded Distinguished Flying Cross 22 April 1942 (22 Sqn. Temporary Squadron Leader). Awarded bar to Distinguished Flying Cross August 1943 (22 Sqn. Squadron Leader). Citation for DFC reads as follows ‘Squadron Leader LEARMONTH was posted to No.22 (Intruder) Squadron on the 22nd April, 1942, and has been the flight leader of all strikes carried out by "A" Flight of the squadron. He has taken part in one hundred and thirty six sorties and under his leadership his flight has reached every allotted target successfully, bombing and strafing from vulnerable heights of 1,000 feet to almost ground level. He was the leader of a formation which bombed and sank a "Hubiki" class destroyer during the battle of the Bismark Sea on 3rd March, 1943. His efficiency and speed in getting his flight in the air and the determined manner in which he initiated the attack resulted in two direct hits on the destroyer. Squadron Leader LEARMONTH has been the leader of many strikes against enemy lines of communication between Salamaua and Wau and has also led flights on bombing and strafing attacks against Komiatum, Mubo, Garrison Hill, Mat Mat Hill, Guadagasal, Saddle, Waipali often descending to as low as 400 feet to make sure of hitting his target. On one occasion during the attack on Buna, his aircraft was badly hit. Although the starboard aileron controls were shot away, much of the fabric blown off the elevators and the fuselage riddled with holes, he brought his aircraft back to a safe landing at his base by the exercise of great skill and coolness. Throughout his entire operational career, Squadron Leader LEARMONTH has set an example of courage, determination, leadership and devotion to duty which would be difficult to equal’. The Official History by Gillison - Royal Australian Airforce 1939-42, mentions the action on 3rd March 1943 on page 694. Learmonth is also mentioned in Odgers - Air War Against Japan 1943-45, on page 29 for action 7th July 1943 on a morning attack on Observation Hill and on page 35 for action 22nd July at Gasmata, New Britain. Citation for bar to DFC reads as follows ‘Since being posted to No.22 (Int.) Squadron in April, 1942, Squadron Leader LEARMONTH has given outstanding and distinguished service. He has completed 159 sorties, 49 of which have resulted in strikes against advanced enemy positions. After having temporarily commanded this squadron for several short periods, he was appointed to its command on the 21st June, 1943. He has led his squadron in many successful attacks on Salamaua, Komiatium Ridge, the Pimple and more recently at Gasmata. He has displayed tactical ability amounting to genius, and its faculty, together with his thoroughness, determination and coolness has been largely responsible for the destruction of the objectives assigned to his Squadron. He has proved himself to be an exceptionally capable squadron commander, the whole of whose operational services has been distinguished by devotion to duty in the highest order’. During his service career Learmonth flew the following aircraft: Avro Anson, Hudsons, Wapiti, DC3, Moth Minor, Wirraway, Boston, Beaufforts and Beaufighter.