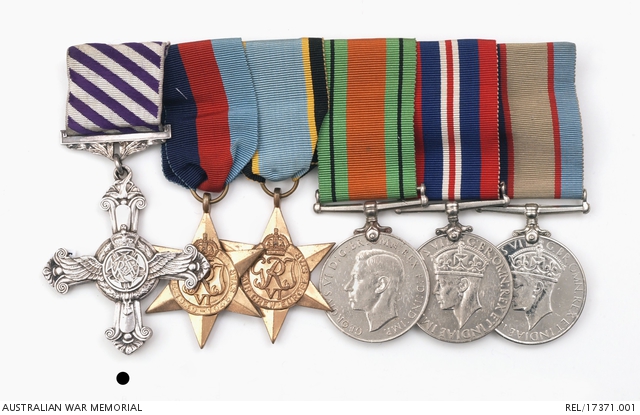 Awarded to 416460 Flight Lieutenant Gordon David Le Messurier Seddon. He was born in Medindie, South Australia on 3 November 1915. Seddon enlisted in the RAAF in Adelaide on 23 June 1941. He was trained as a pilot and flew Lancasters with Bomber Command for 115 Squadron, RAF. He was awarded the Distinguished Flying Cross for his actions in early 1944 and the award was presented to him on 5 July that year by King George VI at Royal Air Force Station, Witchford. The citation reads, 'Flight Lieutenant SEDDON has completed a large number of bombing sorties during which he has attacked various targets with success. This officer has displayed great skill and determination, qualities which were amply demonstrated on a recent occasion when attacking Berlin. In spite of intense anti-aircraft fire, he made several runs over the target area to release his bombs. Flight Lieutenant SEDDON is a most efficient captain whose example has proven most inspiring.' F/Lt Seddon was discharged from the RAAF on 19 September 1945.