In freedom's cause our soldiers offer their lives 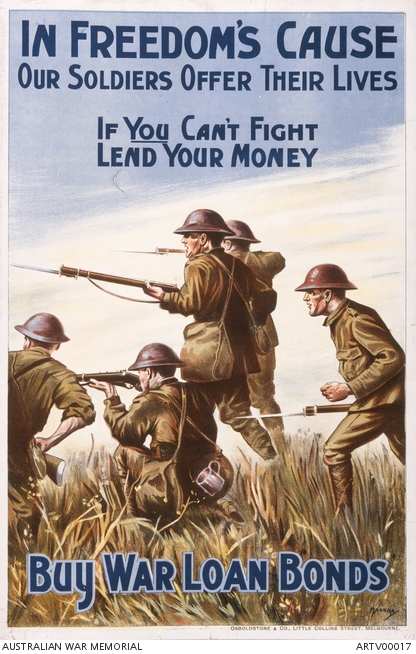 Depicts soldiers in combat, with the text urging the viewer to buy war bonds if unable to fight. The title, printed in blue ink, occupies the upper part of the poster and is printed against the blue background of the sky. The image occupies the whole. Infantry are depicted advancing through yellow grass. Some are standing, peering into the distance. One is depicted kneeling and taking aim with his rifle. 'Buy war loan bonds' is printed across the bottom section of the poster, and is printed in blue ink.

Many countries involved in the war realised that they would need more funds to resource their campaigns, and accordingly developed war loan programs. These programs encouraged the population to purchase government war bonds which would be repaid with interest, and assist the war effort. The loan subscriptions were extremely successful in Australia, often exceeding the targeted amount. As the conflict drew to a close, the posters promised that the purchase of bonds would bring a speedy resolution to the war.