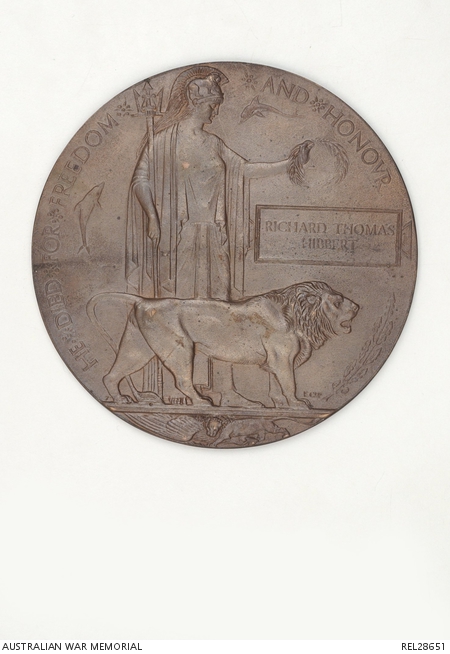 Bronze next of kin plaque, showing on the obverse, Britannia holding a laurel wreath, the British lion, dolphins, a spray of oak leaves and the words 'HE DIED FOR FREEDOM AND HONOUR' around the edge. Beneath the main figures, the British lion defeats the German eagle. The initials 'ECP', for the designer Edward Carter Preston appear above the lion's right forepaw. A raised rectangle above the lion's head bears the name 'RICHARD THOMAS HIBBERT'.

Born at Wilberforce, New South Wales in 1877, Richard Thomas Hibbert, a farmer, enlisted at Windsor on 3 April 1917, aged 39. He had previously served in the militia, in the Windsor squadron of the New South Wales Lancers. After initial training Hibbert was posted as a private, service number 3566, to the 8th Reinforcements for the 30th Battalion. He sailed with his unit from Sydney in august, aboard HMAT A70 Ballarat. After further training in England Hibbert arrived in France at the end of November to join his battalion, however, he was almost immediately transferred to the 56th Battalion, where he served in 7th Platoon, B Company, as one of the battalion's stretcher bearers.

Hibbert was hit in the chest by a shell, which killed him outright, while he was bringing in wounded men on 3 April 1917, after the attack on Louvain-Louveral. He is buried in the Vaulx Hill Cemetery in France.

This commemorative plaque was sent to his widowed mother, Harriet, in August 1922.