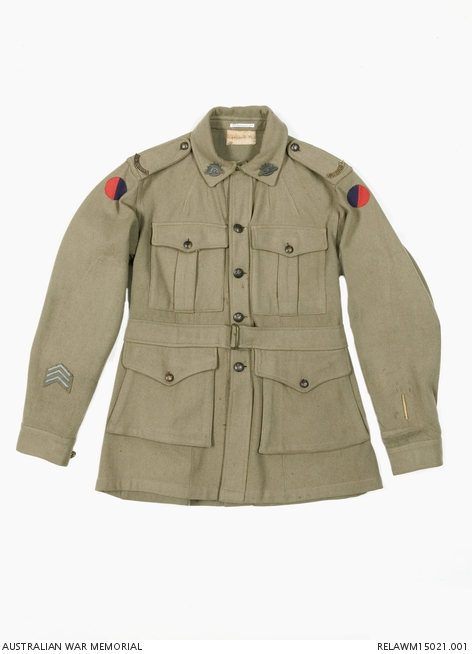 Australian Army khaki woollen service dress tunic with stand and fall collar.The collar has oxidised brass Rising Sun (general service) badges secured by split pins.The shoulder straps have a curved voided oxidised brass 'AUSTRALIA', and are fastened to the tunic by a small brass 'AUSTRALIAN MILITARY FORCES' button.The tunic is secured along the front by four large brass AMF buttons with 'COMMONWEALTH' stamped on the rear.The top button has been removed and replaced with a hook and a press stud.This modification may have been undertaken so the wearer could dress himself more easily after his arm was amputated. There are two darts running from the collar to just above the breast pockets.All the front pockets have scalloped flaps secured by small AMF oxidised brass buttons.The patch pockets on the breast are box pleated, with the right side pocket button attached to the flap with two small sticks and a brass hook on the pocket.The lower larger pockets are attached to the integral waistband and have expanding sides.Sewn onto both sleeve shoulders is the circular blue over red colour patch of 4 Division Australian Field Artillery units. Above the right sleeve cuff is an embroidered overseas service chevron with three blue stripes, and there is a brass wound stripe above the left cuff.There are four small cuts in a square pattern above the wound stripe. Inside the right sleeve is a double thickness 250mm long patch which has been herringboned stitched in place, possibly to support his recovering arm .A 55mm wide pleat runs down the middle of the back of the unlined tunic, gathering into the belt.There is a brass buckle on the belt.The maker's white cotton label is sewn inside the collar but the only discernible detail is a broad arrow. Sewn inside the right front panel below the waistband is a patch pocket for shell dressing.'3793' has been roughly hand sewn in thread in the corner of the front panel below the shell dressing pocket.

Worn by 31114 Gunner Leo Whitby Robinson, 10 Field Artillery Brigade, AIF 4th Division.He was born in Sydney in 1879 and was a solicitor before joining the AIF on the 18th September 1916.Robinson was posted to the 23rd reinforcements for the 1st Australian Field Artillery and taken on strength to the 10th AFA brigade on 3rd August 1917.He was severely wounded on the 14th October 1917 resulting in the amputation of the right forearm, as well as multiple gunshot wounds to his right foot and thigh.After months recuperating in various hospitals in England, he returned to Australia in April 1918 at his own expense.On his way home, Robinson spent some months in America on propaganda work.
The 4th division was formed in February 1916 in Egypt, and moved to the "nursery" sector near Armentieres in June 1916.They joined the 1st and 2nd divisions in the Somme areas soon after and repulsed a major German counterattack at Pozieres heights.They took part in the defence of Moquet farm in September 1916, then Flers in October 1916.In April the following year the 4th division were engaged in the assault on the Hindenburg Line in the first battle of Bullecourt.In June 1917, they were active in the Battle of Messiness, then the Battle of Polygon wood in September.Robinson was wounded in October 1917, possibly during mopping up operations after this battle.The 4th Division went on to participate in the Battle of Hamel, Battle of Epehy, Battle of Amiens and the Hindenburg Line, ending up at the town of Bellenglise.
The tunic was most likely made in London for his return to Australia.