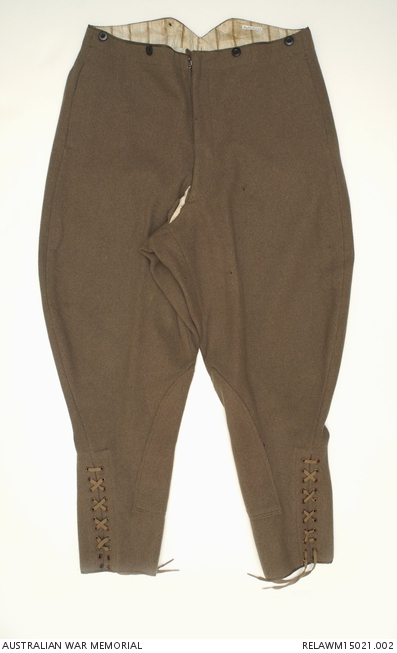 Australian Army Other Ranks Dismounted Pattern khaki woollen cord breeches.The six buttons on the waistband and four on the concealed fly are black plastic.The top button on the fly has been replaced with a large nickel-plated hook-and-eye fastener.There are welt pockets on each side seam and on the right rear.Protective panels of the same cord fabric have been sewn onto the inner legs.On the outside of both leg cuffs are eleven pairs of painted brown metal eyelets fitted with crossed-over brown cotton laces.The bottom edge of both leg cuffs are trimmed with brown cotton twill.There is a silver metal buckle and strap for adjusting the waistband..The inside of the waistband is lined with striped cream, blue and brown cotton twill, and the pockets are lined with a heavier brown cotton twill.The fly and waistband are reinforced with cream coloured linen.

Worn by 31114 Gunner Leo Whitby Robinson, 10 Field Artillery Brigade, AIF 4th Division.He was born in Sydney in 1879 and was a solicitor before joining the AIF on the 18th September 1916.Robinson was posted to the 23rd reinforcements for the 1st Australian Field Artillery and taken on strength to the 10th AFA brigade on 3rd August 1917.He was severely wounded on the 14th October 1917 resulting in the amputation of the right forearm, as well as multiple gunshot wounds to his right foot and thigh.After months recuperating in various hospitals in England, he returned to Australia in April 1918 at his own expense.On his way home, Robinson spent some months in America on propaganda work.
The 4th division was formed in February 1916 in Egypt, and moved to the "nursery" sector near Armentieres in June 1916.They joined the 1st and 2nd divisions in the Somme areas soon after and repulsed a major German counterattack at Pozieres heights.They took part in the defence of Moquet farm in September 1916, then Flers in October 1916.In April the following year the 4th division were engaged in the assault on the Hindenburg Line in the first battle of Bullecourt.In June 1917, they were active in the Battle of Messiness, then the Battle of Polygon wood in September.Robinson was wounded in October 1917, possibly during mopping up operations after this battle.The 4th Division went on to participate in the Battle of Hamel, Battle of Epehy, Battle of Amiens and the Hindenburg Line, ending up at the town of Bellenglise.