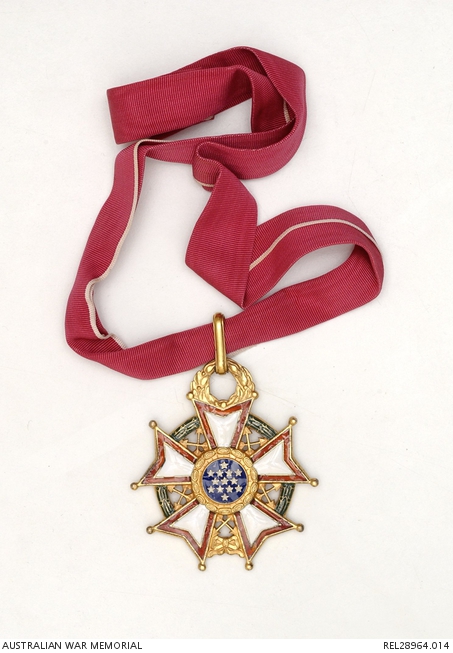 Badge of Commander of the United States Legion of Merit. Unnamed as issued. Instituted in 1942, the Legion of Merit is awarded to those 'who shall have distinguished themselves by exceptionally meritorious conduct in the performance of outstanding services'. The award is a central disc of blue enamel with thirteen white stars surrounded by a circle of gold clouds. Emitting from this are five cleft rays in reddish brown and white enamel, with golden ball finials. Between the rays are pairs of crossed gold arrows and a laurel wreath in green enamel. The reverse is similar, but the central gold disc is blank apart from a circular band containing the raised words 'ANNUIT COEPTIS' ('He has favoured our undertakings') and the date 'MDCCLXXXII' (1782, the year in which the first 'Badge of Miltary Merit' was instituted). The reverse of the laurel wreath is concealed by a golden banner containing the raised words 'UNITED STATES OF AMERICA'. Suspension is by a gilded laurel wreath at the top of the central ray, attached to a flattened loop for the ribbon. The ribbon itself is a cerise neck band with narrow white edges.

Born in 1899, Harold Bruce Farncomb was part of the first intake to the Royal Australian Naval College in 1913. A successful student, in 1916 he topped his year on graduation. After graduating he served in the First World War in HMS Royal Sovereign. Between the wars, he graduated from the Royal Naval Staff College at Greenwich, and attended the Imperial Defence College in London. Promoted commander in 1932, Farncomb joined HMAS Australia as executive officer, and after the ship took the Duke of Gloucester to England in 1934, was appointed Member of the Royal Victorian Order. In 1937 he became the first RANC graduate to be promoted captain, commanding HMAS Yarra, and then HMAS Perth at the outbreak of war. Farncomb spent almost all of the war commanding ships at sea, becoming known as 'Fearless Frank'. After leading HMAS Canberra in patrols of the Indian Ocean, and the Australia in the battles of the Coral Sea and Guadalcanal, he was awarded the Distinguished Service Order for 'For skill, resolution and coolness during operations in the Solomon Islands whilst commanding HMAS Australia'. In 1944 he was posted to the UK to take command of HMS Attacker, which participated in the landings in southern France and the liberation of the Aegean. When Commodore Collins was wounded at Leyte, Farncomb replaced him as commander of the Australian Squadron, in HMAS Australia. He led the squadron in support of landings in the Philippines and later at Wewak, Labuan and Balikpapan. For his leadership he was awarded the US Legion of Merit, 'For distinguishing himself by exceptionally meritorious performance of duty in a position of great responsibility as a cruiser squadron and task force commander operating with the United States Seventh Fleet from October 1944 to August 1945. During the operations at Lingayen, Luzon, Corregidor, Tarakan, Brunei Bay and Balikpapan, the forces under the courageous and capable direction of Commodore Farncomb lent excellent fire support.'