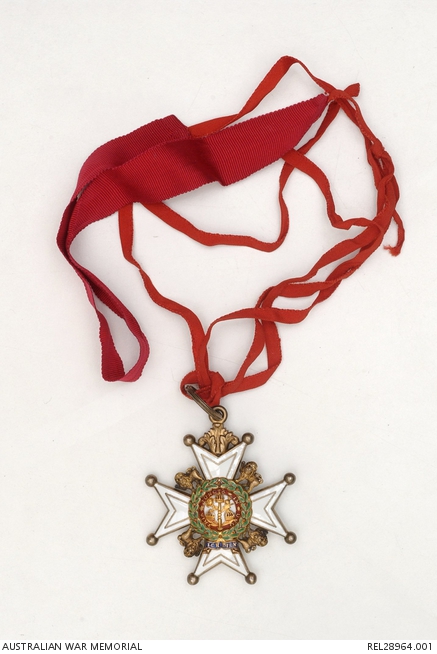 Badge of Companion of the Most Honourable Order of the Bath (Military division). Unnamed as issued.

Born in 1899 in Sydney, Harold Bruce Farncomb was part of the first intake to the Royal Australian Naval College in 1913. A successful student, in 1916 he topped his year before graduating. Between the wars, he graduated from the Royal Naval Staff College at Greenwich, and attended the Imperial Defence College in London. Promoted commander in 1932, Farncomb joined HMAS Australia as executive officer, and after the ship took the Duke of Gloucester to England in 1934, was appointed Member of the Royal Victorian Order. In 1937 he became the first RANC graduate to be promoted captain, commanding HMAS Yarra, and then the cruiser HMAS Perth at the outbreak of war. Farncomb spent almost all of the war commanding ships at sea, becoming known as 'Fearless Frank'. After leading HMAS Canberra through patrols of the Indian Ocean, and the Australia in the battles of the Coral Sea and Guadalcanal, he was awarded the Distinguished Service Order. In 1944 he was posted to the UK to take command of the escort carrier HMS Attacker, which participated in the landings in southern France and the liberation the Aegean. When Commodore J Collins was wounded at Leyte, Farncomb was flown home to replace him as commander of the Australian Squadron. Once again in the Australia, he led the squadron in support of landings in the Philippines (where the ship was hit by four kamikaze attacks and he was wounded) and later at Wewak, commanding the squadron in HMAS Hobart, and Labuan and Balikpapan, commanding HMAS Shropshire. For his leadership in these actions he was created CB, and awarded the US Navy Cross and later the US Legion of Merit. He retired from the Navy in 1951 to study law, a career in which he also enjoyed success. He died in 1971. The Citation for the Companion of the Order of the Bath reads: 'For most distinguished service in the command of HMA Ships Australia, Shropshire, Arunta and Warramunga which took part in the assault landing in the Lingayen Gulf, Luzon Island.'