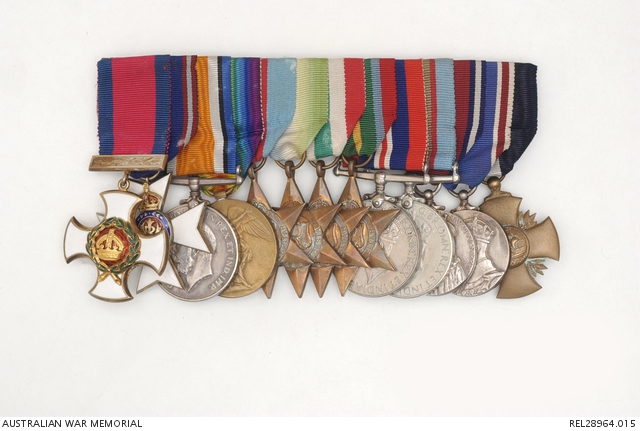 United States Navy Cross. Engraved on reverse with recipient's details. The Navy Cross is awarded for 'Extraordinary heroism in connection with military operations against an armed enemy.' It is a bronze Greek cross with rounded ends and laurel points between the arms. In the centre on the obverse is a disc featuring the raised image of a sailing ship on the waves, while a similar disc on the reverse contains crossed anchors, with between them the letters 'USN'. Suspesion is via a ring through a ball attached to the top arm of the cross. The ribbon is navy blue with a central white stripe of approximately 7 mm.

Born in 1899 in Sydney, Harold Bruce Farncomb was part of the first intake to the Royal Australian Naval College in 1913. A successful student, in 1916 he topped his year before graduating. Between the wars, he graduated from the Royal Naval Staff College at Greenwich, and attended the Imperial Defence College in London. Promoted commander in 1932, he joined HMAS Australia as executive officer, and in 1937 became the first RANC graduate to be promoted captain, commanding HMAS Yarra, and then the new cruiser Perth at the outbreak of war. Farncomb spent almost all of the war commanding ships at sea, becoming known as 'Fearless Frank'. After leading HMAS Canberra through patrols of the Indian Ocean, and the Australia in the battles of the Coral Sea and Guadalcanal, he was awarded the Distinguished Service Order. In 1944 he was posted to the UK to take command of the escort carrier HMS Attacker, which participated in the landings in southern France and the liberation the Aegean. When Commodore John Collins was wounded at Leyte, Farncomb was flown home to replace him as commander of the Australian Squadron. Once again on the Australia, he led the squadron in support of landings in the Philippines and later at Wewak, Labuan and Balikpapan. For his leadership in these actions he was created Companion of the Bath, and awarded the US Navy Cross and later the US Legion of Merit. The Citation for the United States Navy Cross reads, 'For distinguishing himself conspicuously by gallantry and intrepidity in action as Commander, Royal Australian Squadron, during the capture of Lingayen Gulf and the landing on Luzon, Philippine Islands, from 6 January to 9 January, 1945. During this period, in which HMAS AUSTRALIA was hit four times by enemy planes and HMAS ARUNTA seriously damaged, Commodore Farncomb displayed a high degree of courage, determination and professional skill.' Only two Australians were granted this high US award during the Second World War.