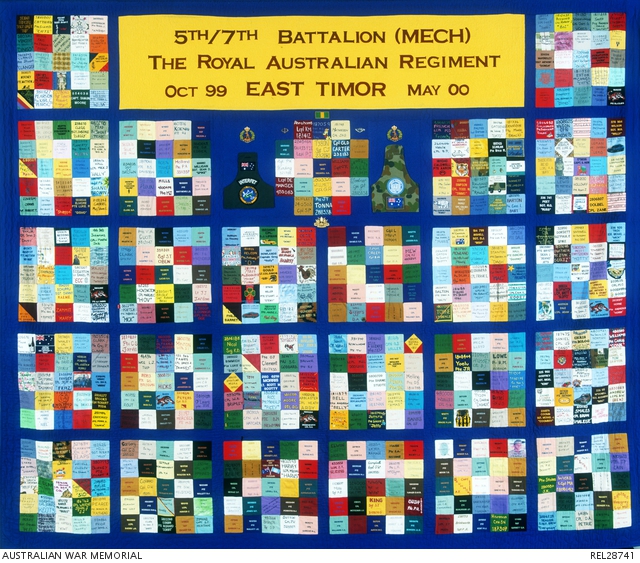 Royal blue cotton quilt, backed with olive green cotton, edged with a band of royal blue bias cut fabric. At the top is a band of yellow fabric bearing machine zig zag stitch appliqued maroon lettering '5TH/7TH BATTALION (MECH) ROYAL AUSTRALIAN REGIMENT OCT 99 EAST TIMOR MAY 00'. These letters also appear to have been glued or ironed into place. The quilt bears 25 panels let into the royal blue fabric. Each panel contains 25 squares, each approximately 10 cm square, bearing the name of a member of the battalion serving in East Timor. The exception is the central panel underneath the main title, which bears 21 squares. Sewn around this central panel are a woven green and yellow colour patch; two machine embroidered badges for the Royal Australian Regiment; an oxidised Infantry Combat badge; a silver anodised Combat Readiness badge; a gold 1991 Pattern Rising Sun badge; a dark green brassard with attached woven or machine embroidered badges of the Australian flag, 'INTERFET' and 'INTERNATIONAL FORCES EAST TIMOR PEACE'; and a disruptive pattern camouflage brassard with woven or machine embroidered badges for the United Nations and Australian flag, with 'AUSTRALIA' beneath it. The royal blue backing to the panels and the yellow title banner have been machine quilted. Each corner of each name square has been hand tied through to the back of the quilt using royal blue embroidery cotton. The back of the quilt has two unbleached calico patches attached to the lower left side. The lower of the patches bears, in black ink, '5/7 RAR (MECH) PIT CREW QUILT TYING BEES 29TH SEPT 2000 & 1ST OCT 2000 BINH BA LINES ROBERTSON BARRACKS N.T.', and the signatures of the participants. The smaller upper patch is laser printed in black with the story of the making of the quilt (see contextual history). A full description of each of the 621 name squares can be found in the attached document.

A laser printed calico panel attached to the back of the quilt tells the story of its making: 'The padre of 5th/7th Battalion (Mech), The Royal Australian Regiment, Capt. Don Kaus, had heard about a quilt commemorating the fiftieth anniversary of the bombing of Darwin. This quilt contains the names of soldiers posted to the area during World War II and is now hanging in the Northern Territory Library,...Capt. Kaus felt that a wall hanging would be an ideal way to express the defence families' respect and admiration for the members of the Battalion deployed to East Timor. His wife Pam mentioned this to Mrs. P.J. Gould, patron of the 5/7 PIT Crew (partners in Timor), and so the idea for a quilt was born. Kerry St Clair volunteered to be quilt coordinator, and with the enthusiastic help of PIT Crew volunteers, this quilt took shape. Many families of the soldiers of this battalion have contributed a patch, representing a husband, brother, son, or friend. Every soldier who served with the battalion in East Timor and those who served at home are represented on this quilt.... Most of the patches are made of 100 percent cotton and written in permanent marker or embroidered. Some patches sent to the quilt committee were of nylon material. Though nylon is not a suitable material for patchwork, it was decided to include these patches where possible to retain the individuality of the contributions. Iron-on interfacing was used to stabilize the materials. Other mediums such as laundry markers, fabric paint, embroidery cotton, biro and felt tip pen, were used to write the names. The completed patchwork top was machined by Vicki Chamberlain of Quilted in the Top End and Mrs. Elaine White sewed the binding. The PIT Crew and family members of the soldiers completed the 900 hand-tied knots. The quilt took 10 months to complete with the last knot tied on 6th October, 2000... [it] was presented on 16th October 2000.'.